(1773) Colonists throw British tea into Boston Harbor
Members of the underground Sons of Liberty, some dressed as Indians, throw 342 chests of tea off British ships to protest “tax tyranny,” or Britain’s Tea Act of 1773, which gave the East India Company a monopoly on the American tea trade. The Boston Tea Party will bring tensions between colonists and the British to a head.
The Boston Tea Party was a political and mercantile protest by the Sons of Liberty in Boston, Massachusetts, on December 16, 1773. The target was the Tea Act of May 10, 1773, which allowed the British East India company to sell tea from China in American colonies without paying taxes apart from those imposed by the Townshend Acts. American Patriots strongly opposed the taxes in the Townshend Act as a violation of their rights. Demonstrators, some disguised as Native Americans, destroyed an entire shipment of tea sent by the East India Company. 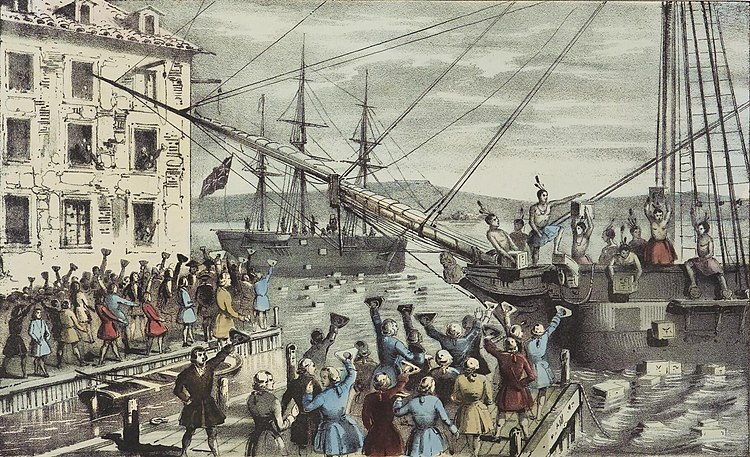 This iconic 1846 lithograph by Nathaniel Currier was entitled The Destruction of Tea at Boston Harbor; the phrase “Boston Tea Party” had not yet become standard. Contrary to Currier’s depiction, few of the men dumping the tea were actually disguised as Native Americans.
wiki/Boston_Tea_Party
4.16.n18
(1773) Colonists throw British tea into Boston Harbor.
Also on this day,

Czech composer Antonín Dvořák, director of the National Conservatory of Music in New York, premieres his Symphony No. 9 at Carnegie Hall. Heavily influenced by African-American spirituals, the ‘New World Symphony’ is received with rapturous applause and will become one of the world’s most popular pieces of classical music.

1944 | The Battle of Bulge begins in Belgium

In the heavily forested Ardennes region, German forces launch a surprise counterattack and push deep into the American line, creating a 50-mile wide “bulge” in the Allied front. The battle will continue for a month and will be the deadliest one for US troops in World War II.

The “Howard Hughes of the Mob,” head of the Gambino crime family, is killed along with Thomas Bilotti outside a steak house on the orders of John Gotti. Gotti will assume leadership of the family, though will later be found guilty of the murders and will be sentenced to life in prison in 1992.

(1944) The Battle of Bulge begins in Belgium
In the heavily forested Ardennes region, German forces launch a surprise counterattack and push deep into the American line, creating a 50-mile wide "bulge" in the Allied front. The battle will continue for a month and will be the deadliest one for US troops in World War II.
The Battle of the Bulge was the last major German offensive campaign on the Western Front during World War II. It was launched through the densely forested Ardennes region of Wallonia in eastern Belgium, northeast France, and Luxembourg, towards the end of World War II. The surprise attack caught the Allied forces completely off guard. American forces bore the brunt of the attack and incurred their highest casualties of any operation during the war. The battle also severely depleted Germany's armored forces, and they were largely unable to replace them. German personnel and, later, Luftwaffe aircraft also sustained heavy losses.