(1982) Vietnam Veterans Memorial is dedicated in Washington, DC
Thousands of Vietnam War veterans march to the site and contemplate a wall of black granite sunk into the ground and etched with names of the more than 58,000 of their comrades killed in the war. Maya Lin’s stark design will prove controversial, but ‘The Wall’ will have a lasting impact.
The Vietnam Veterans Memorial is a 2-acre U.S. national memorial in Washington D.C. It honors service members of the U.S. armed forces who fought in the Vietnam War, service members who died in service in Vietnam/South East Asia, and those service members who were unaccounted for during the war. 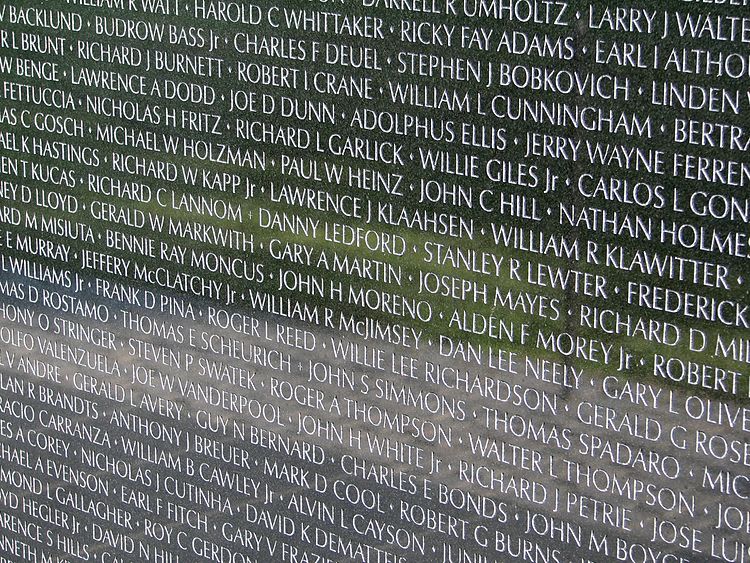 One panel of ‘The Wall’, displaying some of the names of fallen U.S. service members from the Vietnam War.
wiki/Vietnam_Veterans_Memorial
4.15.A18
(1982) Vietnam Veterans Memorial is dedicated in Washington, DC.
Also on this day,

In Browder v. Gayle, the Supreme Court strikes down Alabama laws requiring racial segregation on public buses. The high court rules these laws violate the 14h Amendment, which provides for equal protection under the law. The Montgomery Bus Boycott will end soon after the decision.

Karen Silkwood, a technician at a Kerr-McGee nuclear facility in Crescent, Oklahoma, dies in a one-car crash on her way to meet a journalist to reportedly show him documents that reveal safety issues at the plant. The documents, however, will not be in the car when her body is found.

President Clinton agrees to pay Paula Jones, an ex-Arkansas state worker, $850,000 to drop her lawsuit claiming that he exposed himself to her in a hotel room in 1991. The settlement follows a series of appeals and denials that included an argument before the US Supreme Court.

(1998) President Bill Clinton settles sexual harassment lawsuit
President Clinton agrees to pay Paula Jones, an ex-Arkansas state worker, $850,000 to drop her lawsuit claiming that he exposed himself to her in a hotel room in 1991. The settlement follows a series of appeals and denials that included an argument before the US Supreme Court.
Paula Corbin Jones is a former Arkansas state employee who sued U.S. President Bill Clinton for sexual harassment. The Paula Jones case precipitated Clinton's impeachment in the House of Representatives and the subsequent acquittal by the Senate on February 12, 1999. Charges of perjury and obstruction of justice were brought against Clinton. Eventually, the court dismissed the Paula Jones harassment lawsuit, before trial, on the grounds that Jones failed to demonstrate any damages. However, while the dismissal was on appeal, Clinton entered into an out-of-court settlement by agreeing to pay Jones $850,000.