(1687) Warfare almost wipes out an ancient wonder
Having withstood the tumult of more than 2,000 years, the grand and glorious Parthenon of Athens is nearly destroyed when a Venetian mortar round ignites Ottoman Turk gunpowder stored inside. Fourteen columns fall, the roof caves in, and myriad ancient sculptures are lost in the blast.
In 1687, the Parthenon was extensively damaged in the greatest catastrophe to befall it in its long history. As part of the Great Turkish War (1683–1699) , the Venetians sent an expedition led by Francesco Morosini to attack Athens and capture the Acropolis.

Athens, Parthenon, southern side, which sustained considerable damage during the explosion of a powder magazine during a Venetian shelling in 1687.
wiki/Parthenon
4.15.A18
(1687) Warfare almost wipes out an ancient wonder.
Also on this day,

New York’s Winter Garden is overrun with Sharks and Jets as ‘West Side Story’ begins its Broadway run. The musical, a gritty and controversial updating of Shakespeare’s tragic tale of young love, will be a modest stage hit, while its 1961 film adaptation proves a smashing sensation.

US Vice President Richard Nixon meets Senator John Kennedy in a TV station for the first televised presidential debate in US history. As the two candidates spar, it’s obvious that Kennedy is more telegenic and most will consider him the winner, as the era dawns when TV will be a political kingmaker.

Attempting to set aside personal and artistic tensions, the Beatles have returned to the studio for the last recording sessions in which all four members participate. On its release today in the UK, Abbey Road will see mixed critical reviews, but fans will make this swan song the Beatles’ best-selling album.

(1960) Cameras help swing debate
US Vice President Richard Nixon meets Senator John Kennedy in a TV station for the first televised presidential debate in US history. As the two candidates spar, it's obvious that Kennedy is more telegenic and most will consider him the winner, as the era dawns when TV will be a political kingmaker.

The 1960 presidential election was the closest election since 1916, which can be explained by a number of factors. Kennedy benefited from the economic recession of 1957–58, which hurt the standing of the incumbent Republican Party, and he had the advantage of 17 million more registered Democrats than Republicans. Furthermore, the new votes that Kennedy, the first Roman Catholic president, gained among Catholics almost neutralized the new votes Nixon gained among Protestants. Kennedy's campaigning skills decisively outmatched Nixon's. In the end, Nixon's emphasis on his experience carried little weight, and he wasted energy by campaigning in all 50 states instead of concentrating on the swing states. Kennedy used his large, well-funded campaign organization to win the nomination, secure endorsements, and, with the aid of the big-city bosses, get out the vote in the big cities. Kennedy relied on running mate Lyndon B. Johnson to hold the South, and used television effectively. There were 14 unpledged electors and one faithless elector in the election. All eight electors from Mississippi, as well as six of the 11 electors from Alabama, were unpledged and voted for the Byrd/Thurmond ticket, while one faithless elector from Oklahoma voted for the Byrd/Goldwater ticket. 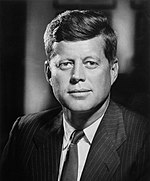 John Fitzgerald "Jack" Kennedy (May 29, 1917 – November 22, 1963), commonly referred to by his initials JFK, was an American statesman who served as the 35th President of the United States from January 1961 until his assassination in November 1963. Kennedy served at the height of the Cold War, and much of his presidency focused on managing relations with the Soviet Union. He was a member of the Democratic Party who represented Massachusetts in the United States House of Representatives and the United States Senate prior to becoming president.

Kennedy was born in Brookline, Massachusetts, to Joseph P. Kennedy, Sr. and Rose Kennedy. A scion of the Kennedy family, he graduated from Harvard University in 1940 before joining the United States Naval Reserve the following year. During World War II, Kennedy commanded a series of PT boats in the Pacific theater and earned the Navy and Marine Corps Medal for his service. After the war, Kennedy represented Massachusetts's 11th congressional district in the United States House of Representatives from 1947 until 1953. He was subsequently elected to the U.S. Senate and served as the junior Senator from Massachusetts from 1953 until 1960. While serving in the Senate, he published Profiles in Courage, which won the Pulitzer Prize for Biography. In the 1960 presidential election, Kennedy narrowly defeated Republican opponent Richard Nixon, who was the incumbent Vice President.

Kennedy's time in office was marked by high tensions with Communist states in the Cold War. He increased the number of American military advisers in South Vietnam by a factor of 18 over President Dwight D. Eisenhower. In April 1961, he authorized a failed joint-CIA attempt to overthrow the Cuban government of Fidel Castro in the Bay of Pigs Invasion. He subsequently rejected plans by the Joint Chiefs of Staff to orchestrate false-flag attacks on American soil in order to gain public approval for a war against Cuba. In October 1962, U.S. spy planes discovered that Soviet missile bases had been deployed in Cuba; the resulting period of tensions, termed the Cuban Missile Crisis, nearly resulted in the breakout of a global thermonuclear conflict. Domestically, Kennedy presided over the establishment of the Peace Corps and supported the Civil Rights Movement, but he was largely unsuccessful in passing his New Frontier domestic policies. Kennedy continues to rank highly in historians' polls of U.S. presidents and with the general public. His average approval rating of 70% is the highest of any president in Gallup's history of systematically measuring job approval.

On November 22, 1963, Kennedy was assassinated in Dallas, Texas. Lee Harvey Oswald was arrested for the crime, but he was never prosecuted due to his murder by Jack Ruby two days later. Pursuant to the Presidential Succession Act, Vice President Lyndon B. Johnson was sworn in as president later that day. The FBI and the Warren Commission officially concluded that Oswald was the lone assassin, but various groups believed that Kennedy was the victim of a conspiracy. After Kennedy's death, many of his proposals were enacted, including the Civil Rights Act of 1964 and the Revenue Act of 1964. 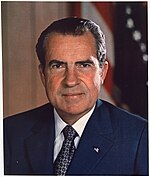 Nixon ended American involvement in the war in Vietnam in 1973 and brought the American POWs home, and ended the military draft. Nixon's visit to the People's Republic of China in 1972 eventually led to diplomatic relations between the two nations, and he initiated détente and the Anti-Ballistic Missile Treaty with the Soviet Union the same year. His administration generally transferred power from Washington D.C. to the states. He imposed wage and price controls for ninety days, enforced desegregation of Southern schools and established the Environmental Protection Agency. Nixon also presided over the Apollo 11 moon landing, which signaled the end of the moon race. He was reelected in one of the largest electoral landslides in U.S. history in 1972 when he defeated George McGovern.