(1054) East and West in Constantinople Church clash
The conflict between the Latin West and Greek East divisions of the Christian church heats up when a Papal writ of excommunication is placed by Western Roman legates on the altar of the Hagia Sofia, the holy site of the Christian East. It’s the first major crack that will end in a total break some 100 years later.
The East–West Schism, also called the Great Schism and the Schism of 1054, was the break of communion between what are now the Catholic Church and Eastern Orthodox churches, which has lasted since the 11th century. The Schism was the culmination of theological and political differences between the Christian East and West which had developed over the preceding centuries, and marked the first time since the Edict of Milan that there was more than one body considered by secular authorities to constitute the Christian Church.

Icon depicting the Emperor Constantine (centre) and the bishops of the First Council of Nicaea (325) holding the Niceno–Constantinopolitan Creed of 381
wiki/East–West_Schism
4.13.j18
(1054) East and West in Constantinople Church clash.
Also on this day,

Architects of the Manhattan Project, including project director J. Robert Oppenheimer, gather in shelters 10,000 yards from ‘The Gadget’s’ detonation site in New Mexico and at 5:29 AM the world’s first nuclear bomb explosion, code-named Trinity, pierces the darkness with 20 kilotons of atomic power.

1951 | Holden Caulfield is done with phonies in Salinger’s new novel, ‘Catcher in the Rye’

A teenager is expelled from school and travels to New York City to spend a few days wandering around. Out of this deceptively simple plotline, J.D. Salinger weaves an archetypal tale of teenage angst in ‘The Catcher in the Rye,’ a novel published today that will be hailed and censored in equal measure.

Edmonton gets their own ‘royal wedding’ when The Great One marries American actress Janet Jones. Hockey stars Gordie Howe and Paul Coffey are in attendance, as is Gretzky’s longtime friend, actor Alan Thicke. But Jones’ elaborate wedding dress, reportedly covered in 40,000 crystals, steals the show.

(1945) Nuclear age begins in New Mexico
Architects of the Manhattan Project, including project director J. Robert Oppenheimer, gather in shelters 10,000 yards from 'The Gadget's' detonation site in New Mexico and at 5:29 AM the world's first nuclear bomb explosion, code-named Trinity, pierces the darkness with 20 kilotons of atomic power.
Trinity was the code name of the first detonation of a nuclear weapon. It was conducted by the United States Army at 5:29 am on July 16, 1945, as part of the Manhattan Project. The test was conducted in the Jornada del Muerto desert about 35 miles southeast of Socorro, New Mexico, on what was then the USAAF Alamogordo Bombing and Gunnery Range. The only structures originally in the vicinity were the McDonald Ranch House and its ancillary buildings, which scientists used as a laboratory for testing bomb components. A base camp was constructed, and there were 425 people present on the weekend of the test. 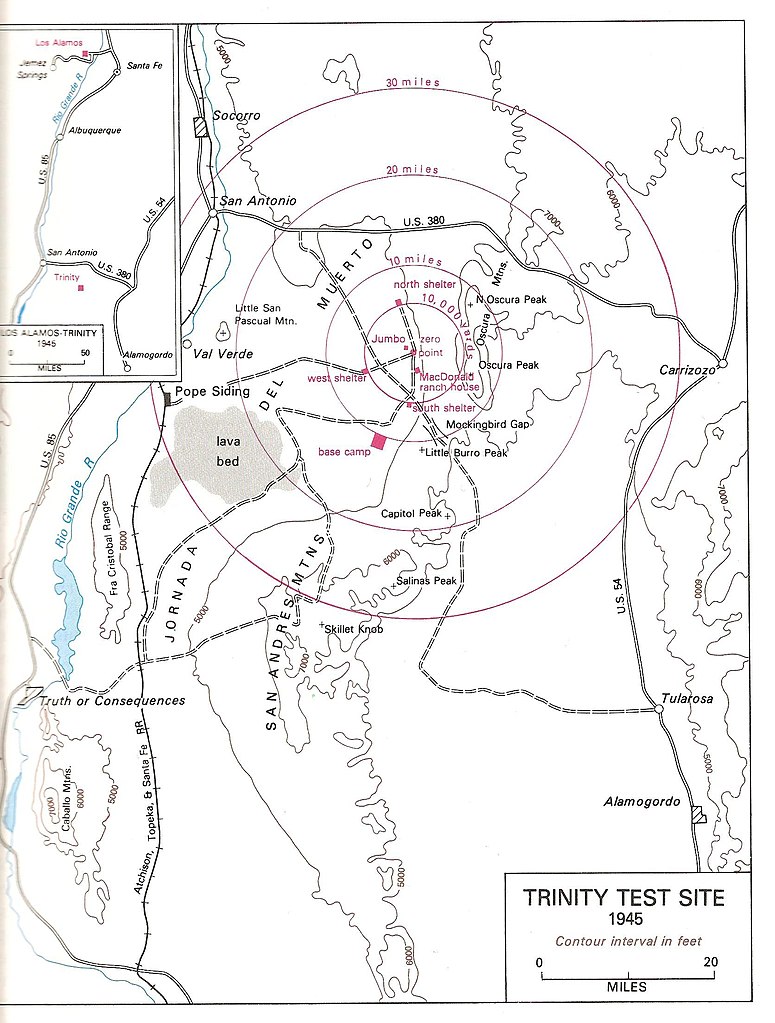