(1799) The key to unlocking ancient hieroglyphs is found in Egypt
A large slab inscribed with three different languages, including hieroglyphics and Ancient Greek, is discovered by a soldier in Napoleon’s Egyptian campaign. Once part of a monument from 196 BCE, the Rosetta Stone will be the modern world’s key to deciphering ancient Egyptian hieroglyphics.
The Rosetta Stone is a granodiorite stele, found in 1799, inscribed with three versions of a decree issued at Memphis, Egypt in 196 BC during the Ptolemaic dynasty on behalf of King Ptolemy V. The top and middle texts are in Ancient Egyptian using hieroglyphic script and Demotic script, respectively, while the bottom is in Ancient Greek. As the decree has only minor differences between the three versions, the Rosetta Stone proved to be the key to deciphering Egyptian hieroglyphs. 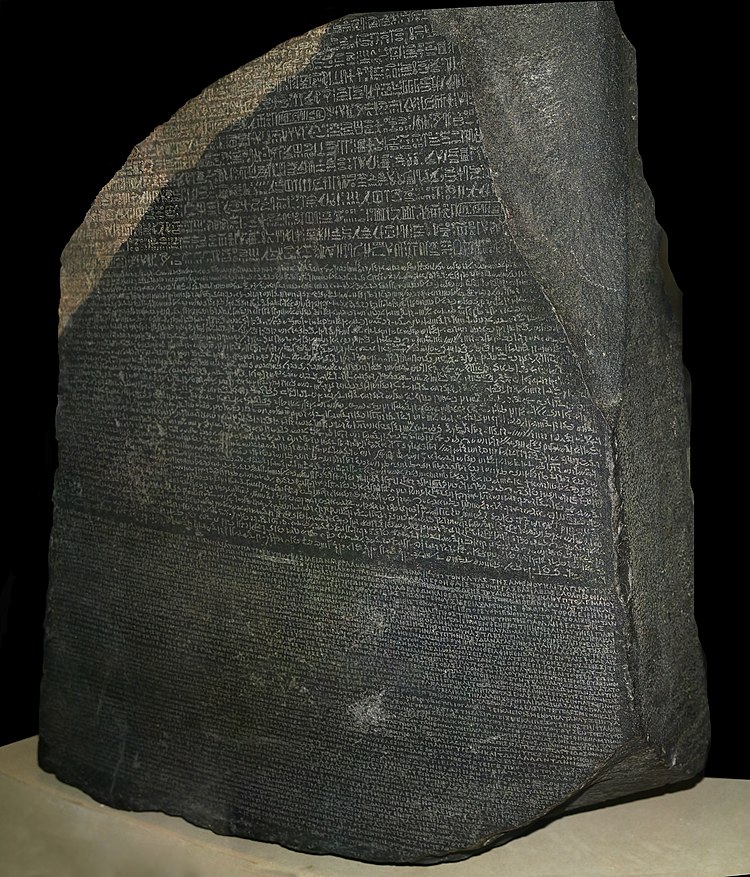 The Rosetta Stone in the British Museum
wiki/Rosetta_Stone
4.13.j18
(1799) The key to unlocking ancient hieroglyphs is found in Egypt.
Also on this day,

Instituted by King Ferdinand II and Queen Isabella in 1478, the dreaded Spanish Inquisition finally comes to an official end. Preaching a doctrine that ordered conversion to Catholicism or exile, and employing torture and death sentences, the Inquisition will not be missed.

1870 | Last Confederate state is readmitted to the Union

The United States is once again made whole as Georgia gains representation in Congress, making it the last of the former Confederate states to be readmitted to the Union. It’s a watershed moment for Reconstruction, but the process of healing after the Civil War will remain arduous.

Just back from a morning walk, Italian style icon Gianni Versace is shot twice while on the front steps of his Miami Beach, Florida, mansion. The fifth and final victim of Andrew Cunanan’s multi-state crime spree, Versace will be mourned by family, friends, and a shocked fashion industry.

At the end of the American Civil War, the devastation and disruption in the state of Georgia were dramatic. Wartime damage, the inability to maintain a labor force without slavery, and miserable weather had a disastrous effect on agricultural production. The state's chief cash crop, cotton, fell from a high of more than 700,000 bales in 1860 to less than 50,000 in 1865, while harvests of corn and wheat were also meager. The state government subsidized construction of numerous new railroad lines. White farmers turned to cotton as a cash crop, often using commercial fertilizers to make up for the poor soils they owned. The coastal rice plantations never recovered from the war.

Bartow County was representative of the postwar difficulties. Property destruction and the deaths of a third of the soldiers caused financial and social crises; recovery was delayed by repeated crop failures. The Freedmen's Bureau agents were unable to give blacks the help they needed.