(1995) Statecraft in space as an American shuttle meets the Mir
For the first time in history a US space shuttle docks with a Russian space station, as Atlantis shuttle commander Robert ‘Hoot’ Gibson pilots his craft at 17,500 mph to dock with the massive Mir space station. Their meeting creates the largest manmade object ever to orbit the earth.
The Shuttle–Mir Program was a collaborative space program between Russia and the United States, which involved American Space Shuttles visiting the Russian space station Mir, Russian cosmonauts flying on the shuttle, and an American astronaut flying aboard a Soyuz spacecraft to engage in long-duration expeditions aboard Mir. 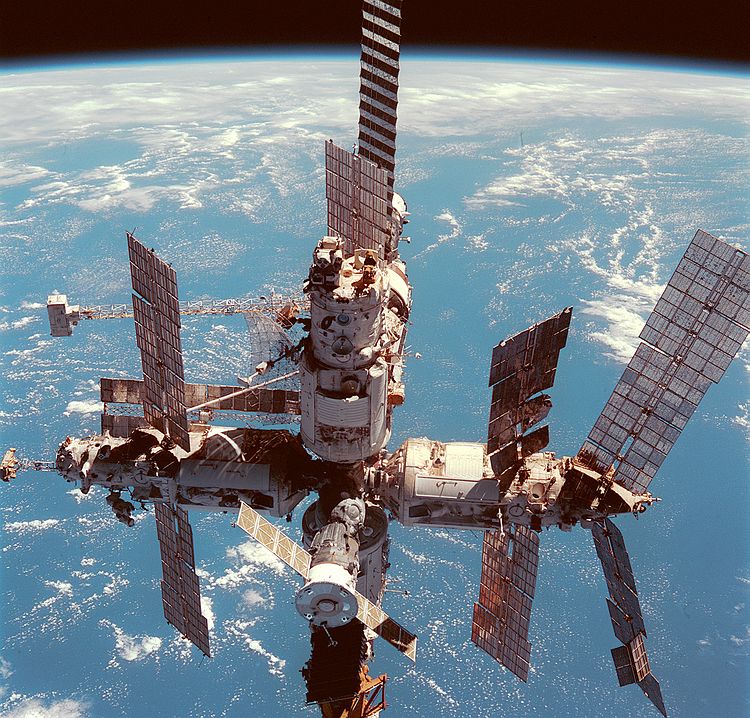 The view of Mir from Space Shuttle Discovery as it left the station during STS-91. Russia’s Mir space station is backdropped over the blue and white planet Earth in this medium range photograph recorded during the final fly-around of the members of the fleet of NASA’s shuttles. Seven crew members, including Andrew S.W. Thomas, were aboard the Space Shuttle Discovery when the photo was taken; and two of his former cosmonaut crewmates remained aboard Mir. Thomas ended up spending 141 days in space on this journey, including time aboard Space Shuttles Endeavour and Discovery, which transported him to and from Mir.
wiki/Shuttle–Mir_Program
4.12.j18
(1995) Statecraft in space as an American shuttle meets the Mir.
Also on this day,

King Pōmare V cedes a 403-square-mile island in the remote South Pacific to France as he abdicates his throne under pressure from his chiefs. Tahiti will be the crown jewel of French Polynesia, but indigenous Tahitians will have to wait until 1946 for full French citizenship.

A clash between General Leslie Groves and physicist J. Robert Oppenheimer threatens to derail a top-secret American military project in the New Mexico desert, and President Franklin Roosevelt intervenes with a letter of heartfelt support written to get the Manhattan Project back on track.

A salacious trial in England wraps up after a drug bust at Rolling Stones guitarist Keith Richard’s home. No “indian hemp” was actually found, and singer Mick Jagger had only four amphetamine pills, but they’re both convicted and sentenced to prison, Jagger for three months and Richards a year. They’ll spend just two days in prison before the convictions are thrown out.