(1950) North invades south and the Korean War begins
After Japan surrendered at the end of World War II and relinquished control of Korea, the nation has been divided between communist and capitalist powers. With support from the Soviet Union, North Korea now invades US-supported South Korea in a bid to reunify the country, and a bloody 3-year war ensues.
The Korean War was a war between North Korea and South Korea. The war began on 25 June 1950 when North Korea invaded South Korea following a series of clashes along the border. The United Nations, with the United States as the principal force, came to the aid of South Korea. China came to the aid of North Korea, and the Soviet Union also gave some assistance to the North. 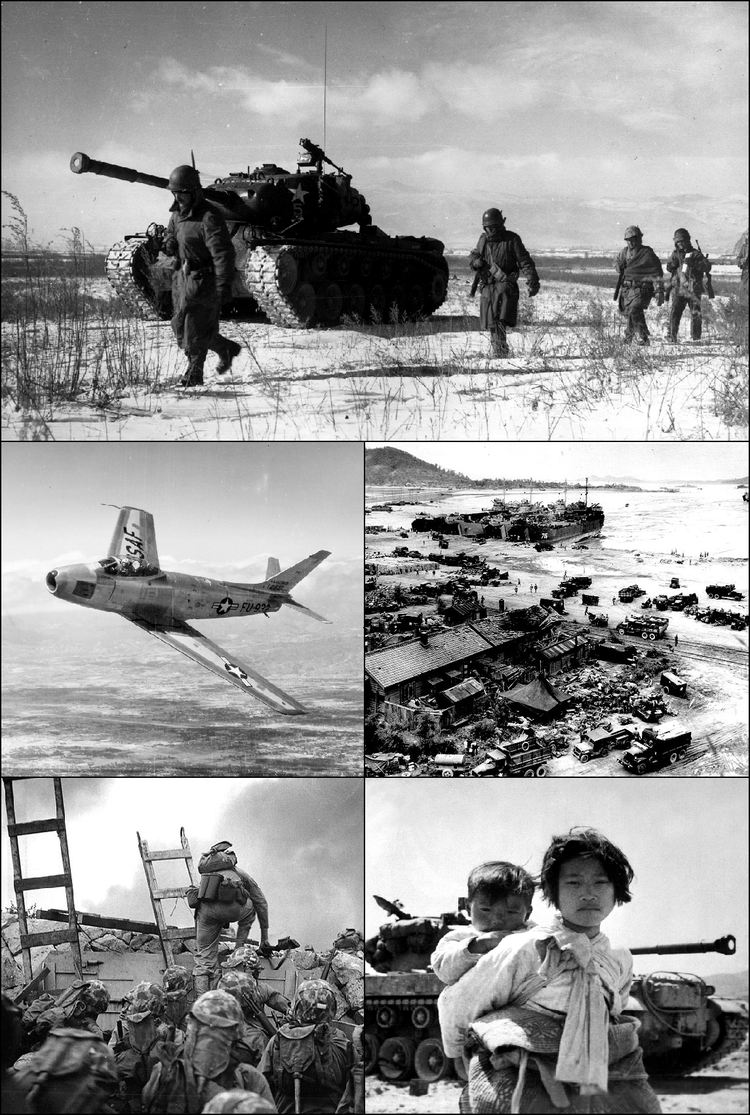 Clockwise from top: A column of the U.S. 1st Marine Division‘s infantry and armor moves through Chinese lines during their breakout from the Chosin Reservoir; UN landing at Incheon harbor, starting point of the Battle of Incheon; Korean refugees in front of a U.S. M26 Pershing tank; U.S. Marines, led by First Lieutenant Baldomero Lopez, landing at Incheon; F-86 Sabre fighter aircraft
wiki/Korean_War
4.12.j18
(1950) North invades south and the Korean War begins.
Also on this day,

A coalition of Native American tribes, resisting a forced move onto reservations, array themselves against George Armstrong Custer’s US 7th Cavalry at the Battle of Little Bighorn in Montana Territory. A vastly overconfident Custer advance is met and wiped out in a matter of an hour.

Two years after her death at 15 in the Bergen-Belsen concentration camp, Anne Frank’s account of her time hiding from the Nazis with her Jewish family in Amsterdam is published. The diary, which Frank began on her 13th birthday, is heartbreaking and hopeful in equal measure.

Prince releases his sixth album, which also serves as the soundtrack to his film debut. ‘Purple Rain’ will boost The Purple One to new levels of stardom, producing five hit singles, winning two Grammys and an Oscar, and eventually selling more than 20 million copies.