(1215) King John concedes absolute power and puts it in writing
Absolute monarchical power comes to an end when a beleaguered King John formally agrees to respect the feudal privileges of England’s nobility. Belief that this Magna Carta strengthens individual liberty will greatly influence the American Constitution and the development of modern democracies.
Magna Carta Libertatum, commonly called Magna Carta, is a charter agreed to by King John of England at Runnymede, near Windsor, on 15 June 1215. First drafted by the Archbishop of Canterbury to make peace between the unpopular King and a group of rebel barons, it promised the protection of church rights, protection for the barons from illegal imprisonment, access to swift justice, and limitations on feudal payments to the Crown, to be implemented through a council of 25 barons. Neither side stood behind their commitments, and the charter was annulled by Pope Innocent III, leading to the First Barons’ War. After John’s death, the regency government of his young son, Henry III, reissued the document in 1216, stripped of some of its more radical content, in an unsuccessful bid to build political support for their cause. At the end of the war in 1217, it formed part of the peace treaty agreed at Lambeth, where the document acquired the name Magna Carta, to distinguish it from the smaller Charter of the Forest which was issued at the same time. Short of funds, Henry reissued the charter again in 1225 in exchange for a grant of new taxes; his son, Edward I, repeated the exercise in 1297, this time confirming it as part of England’s statute law. 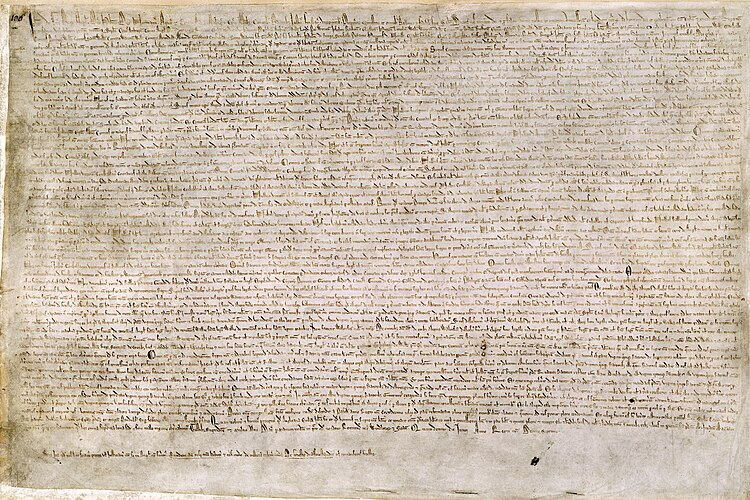 The Magna Carta (originally known as the Charter of Liberties) of 1215, written in iron gall ink on parchment in medieval Latin, using standard abbreviations of the period, authenticated with the Great Seal of King John. The original wax seal was lost over the centuries. This document is held at the British Library and is identified as “British Library Cotton MS Augustus II.106”.
wiki/Magna_Carta
4.12.j18
(1215) King John concedes absolute power and puts it in writing.
Also on this day,
1859 | Two world powers send military forces to solve pig problem

One pig is shot but no people perish in a conflict that proves the necessity of precisely worded territorial treaties. The Pig War begins between British Canada and the US near the San Juan Islands when an ostensibly British-Canadian pig is found rooting for tubers on a supposedly American farm.

Leland Stanford is fairly certain that when a horse gallops there is a moment when all four of its legs leave the ground. He hires photographer Eadweard Muybridge who takes pioneering stop-motion photographs, proving that horses can indeed become airborne for a split second, and the innovative images will mark the dawn of motion pictures.

Congress charters a new national park on the border of North Carolina and Tennessee, the first one to be partially funded by the federal government. Great Smoky Mountains National Park will be officially dedicated in 1940 and become the country’s most-visited national park.