(1642) French missionaries found Montreal
Hired to build a Catholic mission near the St. Lawrence River, 30-year-old Paul Chomedey de Maisonneuve and his group of settlers found Ville-Marie de Montreal. The future city of Montreal faces an uncertain future at first, and the population will dwindle to 50 by a decade later.

The history of Montreal, located in Quebec, Canada, spans some 8,000 years. At the time of European contact, the area was inhabited by the St. Lawrence Iroquoians, a discrete and distinct group of Iroquoian-speaking indigenous people. They spoke Laurentian. Jacques Cartier became the first European to reach the area now known as Montreal in 1535 when he entered the village of Hochelaga on the Island of Montreal while in search of a passage to Asia during the Age of Exploration. Seventy years later, Samuel de Champlain unsuccessfully tried to create a fur trading post but the Mohawk of the Iroquois defended what they had been using as their hunting grounds.

A mission named Ville Marie was built in 1642 as part of a project to create a French colonial empire. Ville Marie became a centre for the fur trade and French expansion into New France until 1760, when it was surrendered to the British army, following the French defeat of the Battle of the Plains of Abraham. British immigration expanded the city. The city’s golden era of fur trading began with the advent of the locally owned North West Company.

Montreal was incorporated as a city in 1832. The city’s growth was spurred by the opening of the Lachine Canal and Montreal was the capital of the United Province of Canada from 1844 to 1849. Growth continued and by 1860 Montreal was the largest city in British North America and the undisputed economic and cultural centre of Canada. Annexation of neighbouring towns between 1883 and 1918 changed Montreal back to a mostly Francophone city. The Great Depression in Canada brought unemployment to the city, but this waned in the mid-1930s, and skyscrapers began to be built.

World War II brought protests against conscription and caused the Conscription Crisis of 1944. Montreal’s population surpassed one million in the early 1950s. A new metro system was added, Montreal’s harbour was expanded and the St. Lawrence Seaway was opened during this time. More skyscrapers were built along with museums. International status was cemented by Expo 67 and the 1976 Summer Olympics. A major league baseball team, the Expos, played in Montreal from 1969 to 2004 when the team relocated to Washington, DC. Historically business and finance in Montreal was under the control of Anglophones. With the rise of Quebec nationalism in the 1970s, many institutions relocated their headquarters to Toronto.

(1875) First Kentucky Derby held
With African-American jockey Oliver Lewis on board, Aristides wins the first Kentucky Derby at a new track founded by the grandson of explorer William Clark. Eight years later, the venue will become known as Churchill Downs.
The Kentucky Derby is a horse race that is held annually in Louisville, Kentucky, United States, on the first Saturday in May, capping the two-week-long Kentucky Derby Festival. The race is a Grade I stakes race for three-year-old Thoroughbreds at a distance of one and a quarter miles at Churchill Downs. Colts and geldings carry 126 pounds and fillies 121 pounds.

(1902) 2,000-year-old computer discovered
A Greek archaeologist examining finds from the haul of the Antikythera shipwreck notices a gear wheel embedded in rock. Decades later, examinations by X-ray and gamma ray will reveal the bronze gear clockwork Antikythera mechanism to be a complex ancient analog computer.

The Antikythera mechanism is an ancient Greek analogue computer and orrery used to predict astronomical positions and eclipses for calendrical and astrological purposes. It could also track the four-year cycle of athletic games which was similar, but not identical, to an Olympiad, the cycle of the ancient Olympic Games.

Found housed in a 340 millimetres (13 in) × 180 millimetres (7.1 in) × 90 millimetres (3.5 in) wooden box, the device is a complex clockwork mechanism composed of at least 30 meshing bronze gears. Using modern computer x-ray tomography and high resolution surface scanning, a team led by Mike Edmunds and Tony Freeth at Cardiff University peered inside fragments of the crust-encased mechanism and read the faintest inscriptions that once covered the outer casing of the machine. Detailed imaging of the mechanism suggests it dates back to 150-100 BC and had 37 gear wheels enabling it to follow the movements of the moon and the sun through the zodiac, predict eclipses and even recreate the irregular orbit of the moon. The motion, known as the first lunar anomaly, was developed by the astronomer Hipparchus of Rhodes in the 2nd century BC, and he may have been consulted in the machine’s construction, the scientists speculate. Its remains were found as one lump, later separated into three main fragments, which are now divided into eighty-two separate fragments after conservation works. Four of these fragments contain gears, while inscriptions are found on many others. The largest gear is approximately 140 millimetres (5.5 in) in diameter and originally had 224 teeth.

The artefact was recovered on May 17, 1902 from the Antikythera shipwreck off the Greek island of Antikythera, which in antiquity was known as Aigila. Believed to have been designed and constructed by Greek scientists, the instrument has been variously dated to about 87 BC, or between 150 and 100 BC, or in 205 BC, or within a generation before the date of the shipwreck (in about 150 BC).

After the knowledge of this technology was lost at some point in antiquity, technological works approaching its complexity and workmanship did not appear again until the development of mechanical astronomical clocks in Europe in the fourteenth century.

All known fragments of the Antikythera mechanism are kept at the National Archaeological Museum in Athens, along with a number of artistic reconstructions of how the mechanism may have looked.

(1954) US Supreme Court rules school segregation unconstitutional
A lawsuit against unfair segregation is heard before the Supreme Court, and the unanimous ruling finds that establishing separate public schools for black and white students is unconstitutional. ‘Brown v. Board of Education’ will be a major landmark in the growing civil rights movement.
Brown v. Board of Education of Topeka, 347 U.S. 483, was a landmark United States Supreme Court case in which the Court declared state laws establishing separate public schools for black and white students to be unconstitutional. The decision overturned the Plessy v. Ferguson decision of 1896, which allowed state-sponsored segregation, insofar as it applied to public education. Handed down on May 17, 1954, the Warren Court’s unanimous decision stated that “separate educational facilities are inherently unequal.” As a result, de jure racial segregation was ruled a violation of the Equal Protection Clause of the Fourteenth Amendment of the United States Constitution. This ruling paved the way for integration and was a major victory of the Civil Rights Movement, and a model for many future impact litigation cases. However, the decision’s fourteen pages did not spell out any sort of method for ending racial segregation in schools, and the Court’s second decision in Brown II, 349 U.S. 294 only ordered states to desegregate “with all deliberate speed”. 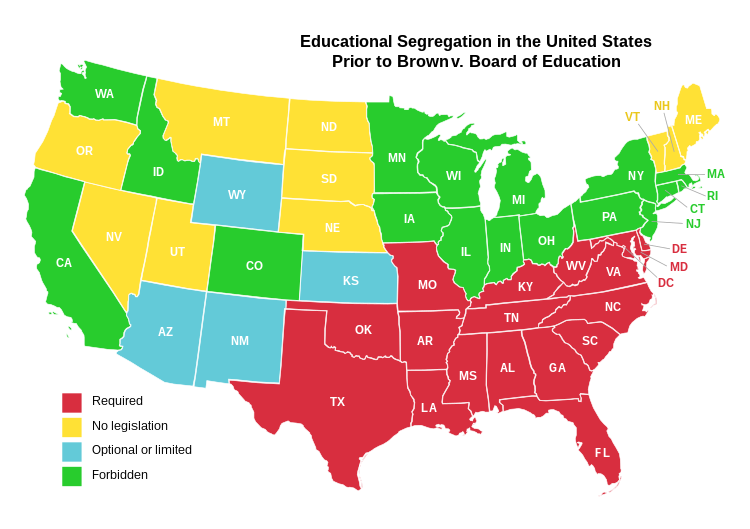