(404 BCE) Spartans rout the Athenians to win the Peloponnesian War
Raging for 27 years, the conflict between the city-state of Athens and the Peloponnesian League ends after Spartan leader Lysander destroys most of the Athenian fleet, and Athens finally surrenders. The war is over, as is the golden age of Greece.
The Peloponnesian War was an ancient Greek war fought by Athens and its empire against the Peloponnesian League led by Sparta. Historians have traditionally divided the war into three phases. In the first phase, the Archidamian War, Sparta launched repeated invasions of Attica, while Athens took advantage of its naval supremacy to raid the coast of the Peloponnese and attempt to suppress signs of unrest in its empire. This period of the war was concluded in 421 BC, with the signing of the Peace of Nicias. That treaty, however, was soon undermined by renewed fighting in the Peloponnese. In 415 BC, Athens dispatched a massive expeditionary force to attack Syracuse in Sicily; the attack failed disastrously, with the destruction of the entire force, in 413 BC. This ushered in the final phase of the war, generally referred to either as the Decelean War, or the Ionian War. In this phase, Sparta, now receiving support from Persia, supported rebellions in Athens’ subject states in the Aegean Sea and Ionia, undermining Athens’ empire, and, eventually, depriving the city of naval supremacy. The destruction of Athens’ fleet at Aegospotami effectively ended the war, and Athens surrendered in the following year. Corinth and Thebes demanded that Athens should be destroyed and all its citizens should be enslaved, but Sparta refused.

Elbe Day, April 25, 1945, is the day Soviet and American troops met at the Elbe River, near Torgau in Germany, marking an important step toward the end of World War II in Europe. This contact between the Soviets, advancing from the East, and the Americans, advancing from the West, meant that the two powers had effectively cut Germany in two.

Elbe Day has never been an official holiday in any country, but in the years after 1945 the memory of this friendly encounter gained new significance in the context of the Cold War between the U.S. and the Soviet Union.

The first contact between American and Soviet patrols occurred near Strehla, after First Lieutenant Albert Kotzebue, an American soldier, crossed the River Elbe in a boat with three men of an intelligence and reconnaissance platoon. On the east bank they met forward elements of a Soviet Guards rifle regiment of the First Ukrainian Front, under the command of Lieutenant Colonel Alexander Gardiev. The same day, another patrol under Second Lieutenant William Robertson with Frank Huff, James McDonnell and Paul Staub met a Soviet patrol commanded by Lieutenant Alexander Silvashko on the destroyed Elbe bridge of Torgau.

On April 26, the commanders of the 69th Infantry Division of the First Army and the 58th Guards Rifle Division of the 5th Guards Army (Soviet Union) met at Torgau, southwest of Berlin. Arrangements were made for the formal “Handshake of Torgau” between Robertson and Silvashko in front of photographers the following day, April 27.

The Soviet, American, and British governments released simultaneous statements that evening in London, Moscow, and Washington, reaffirming the determination of the three Allied powers to complete the destruction of the Third Reich. 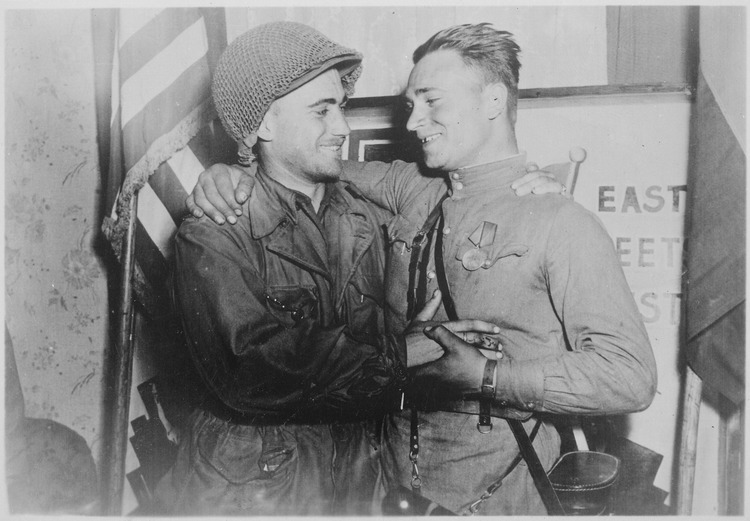 (1961) Robert Noyce receives a patent for the microchip
MIT graduate and cofounder of Fairchild Semiconductor, Robert Noyce is granted a patent for the integrated circuit, or microchip, an essential computer building block. Noyce will later found Intel and be nicknamed “the Mayor of Silicon Valley.”
Robert Norton Noyce, nicknamed “the Mayor of Silicon Valley,” co-founded Fairchild Semiconductor in 1957 and Intel Corporation in 1968. He is also credited with the realization of the first integrated circuit or microchip that fueled the personal computer revolution and gave Silicon Valley its name.