(1775) American Revolutionary War begins
Thirteen colonies enter the bloody struggle to break free from the crown, as British troops arrive in Lexington, Massachusetts, intent on seizing the patriots’ weapons and imprisoning its leaders. Shots are exchanged, eight Americans die, and the war for independence is on.
The American Revolutionary War, also referred to as the American War of Independence and as the Revolutionary War in the United States, was an armed conflict between Great Britain and those thirteen of its North American colonies which after the onset of the war declared independence as the United States of America.

(1897) First running of the Boston Marathon
Inspired by the revival of the Olympic Games the year before and the invention there of the marathon running race, the Boston Athletic Association puts on its own footrace. Fifteen runners take off from the starting line, and 10 finish the 24.5-mile hilly route in Boston’s first marathon.
The Boston Marathon is an annual marathon hosted by several cities in greater Boston in eastern Massachusetts, United States. It is always held on Patriots’ Day, the third Monday of April. Begun in 1897, inspired by the success of the first marathon competition in the 1896 Summer Olympics, the Boston Marathon is the world’s oldest annual marathon and ranks as one of the world’s best-known road racing events. It is one of six World Marathon Majors, and is one of five major events held in the United States through the years of both World Wars.

(1943) Jewish resistance fighters battle in Warsaw Ghetto Uprising
Hundreds of thousands of Jews have been packed by Nazis inside the Warsaw Ghetto, a 1.3-square-mile sector in Poland’s capital. Thousands have already died of disease and starvation, but today many fight back when Germans attempt to ship off the ghetto’s survivors to concentration camps.
The Warsaw Ghetto Uprising was the 1943 act of Jewish resistance that arose within the Warsaw Ghetto in German-occupied Poland during World War II, and which opposed Nazi Germany’s final effort to transport the remaining Ghetto population to Treblinka. The uprising started on 19 April when the Ghetto refused to surrender to the police commander SS-Brigadeführer Jürgen Stroop, who then ordered the burning of the Ghetto, block by block, ending on 16 May. A total of 13,000 Jews died, about half of them burnt alive or suffocated. German casualties are not known, but were not more than 300. It was the largest single revolt by Jews during World War II.

The Oklahoma City bombing was a domestic terrorist truck bombing on the Alfred P. Murrah Federal Building in Downtown, Oklahoma City, Oklahoma, United States on April 19, 1995. Carried out by Timothy McVeigh and Terry Nichols, the bombing destroyed one-third of the building, killed 168 people, and injured more than 680 others. The blast destroyed or damaged 324 other buildings within a 16-block radius, shattered glass in 258 nearby buildings, and destroyed or burned 86 cars, causing an estimated $652 million worth of damage. Extensive rescue efforts were undertaken by local, state, federal, and worldwide agencies in the wake of the bombing, and substantial donations were received from across the country. The Federal Emergency Management Agency (FEMA) activated eleven of its Urban Search and Rescue Task Forces, consisting of 665 rescue workers who assisted in rescue and recovery operations. This was the deadliest terrorist attack on American soil until the September 11 attacks six years later, and it still remains as the deadliest domestic terrorism incident in United States history.

Within 90 minutes of the explosion, McVeigh was stopped by Oklahoma Highway Patrolman Charlie Hanger for driving without a license plate and arrested for illegal weapons possession. Forensic evidence quickly linked McVeigh and Nichols to the attack; Nichols was arrested, and within days, both were charged. Michael and Lori Fortier were later identified as accomplices. McVeigh, who was a U.S. militia movement sympathizer and a veteran in the Gulf War, had detonated a Ryder rental truck full of explosives parked in front of the building. His co-conspirator, Nichols, had assisted in the bomb preparation. Motivated by his dislike for the U.S. federal government and angry about its handling of the Ruby Ridge incident in 1992 and the Waco Siege in 1993, McVeigh timed his attack to coincide with the second anniversary of the deadly fire that ended the siege at the Branch Davidian compound in Waco, Texas.

The official investigation, known as “OKBOMB”, saw FBI agents conduct 28,000 interviews, amass 3.5 short tons (3.2 tonnes) of evidence, and collect nearly one billion pieces of information. The bombers were tried and convicted in 1997. McVeigh was executed by lethal injection on June 11, 2001, and Nichols was sentenced to life in prison in 2004. Michael and Lori Fortier testified against McVeigh and Nichols; Michael was sentenced to 12 years in prison for failing to warn the United States government, and Lori received immunity from prosecution in exchange for her testimony.

As a result of the bombing, the U.S. Congress passed the Antiterrorism and Effective Death Penalty Act of 1996, which tightened the standards for habeas corpus in the United States, as well as legislation designed to increase the protection around federal buildings to deter future terrorist attacks. On April 19, 2000, the Oklahoma City National Memorial was dedicated on the site of the Murrah Federal Building, commemorating the victims of the bombing. Annual remembrance services are held at the same time of day as the explosion occurred. 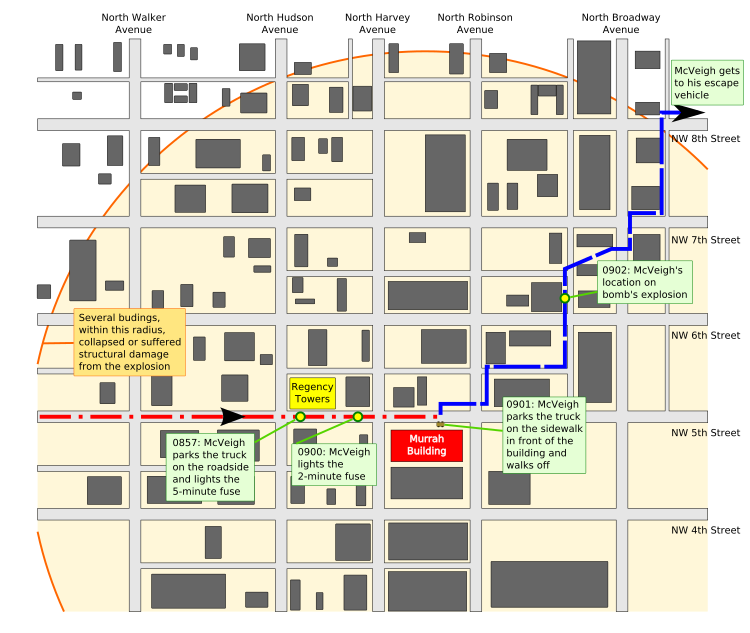