(1775) Paul Revere starts his ‘midnight ride’ of warning
Massachusetts silversmith Paul Revere saddles up and heads off into the night to alert his fellow colonial militia members of the British force’s imminent arrival and their intent to commandeer the American’s arms as well as to arrest patriots Samuel Adams and John Hancock.
Paul Revere was an American silversmith, engraver, early industrialist, and a Patriot in the American Revolution. He is best known for alerting the colonial militia to the approach of British forces before the battles of Lexington and Concord, as dramatized in Henry Wadsworth Longfellow’s poem, “Paul Revere’s Ride”.

(1906) San Francisco leveled by colossal earthquake and fires
At 5:12 AM an extremely powerful earthquake, later estimated at 7.8 magnitude, convulses the bustling metropolis of San Francisco, California. The quake and resulting fires will destroy 80 percent of the city, kill 3,000, and leave upwards of 300,000 homeless.
The 1906 San Francisco earthquake struck the coast of Northern California at 5:12 a.m. on April 18 with an estimated moment magnitude of 7.8 and a maximum Mercalli intensity of XI. Severe shaking was felt from Eureka on the North Coast to the Salinas Valley, an agricultural region to the south of the San Francisco Bay Area. Devastating fires soon broke out in the city and lasted for several days. As a result, about 3,000 people died and over 80% of the city of San Francisco was destroyed. The events are remembered as one of the worst and deadliest natural disasters in the history of the United States. The death toll remains the greatest loss of life from a natural disaster in California’s history and high in the lists of American urban disasters. 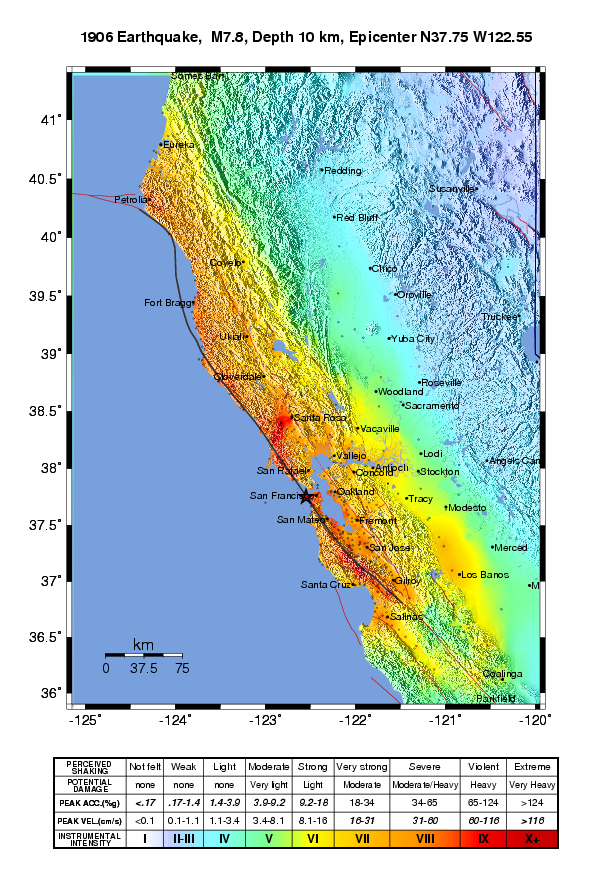 The Republic of Ireland Act 1948 (No. 22 of 1948) is an Act of the Oireachtas (parliament) which declared that Ireland may be officially described as the Republic of Ireland, and vested in the President of Ireland the power to exercise the executive authority of the state in its external relations, on the advice of the Government of Ireland. The Act was signed into law on 21 December 1948 and came into force on 18 April 1949, Easter Monday, the 33rd anniversary of the beginning of the Easter Rising.

The Act ended the remaining statutory role of the British monarchy in relation to the state, by repealing the 1936 External Relations Act, which had vested in George VI and his successors those functions which the Act now transferred to the President.

(1956) Grace Kelly becomes a princess
The movie star marries Prince Rainier III of Monaco in a civil ceremony, effectively ending her acting career. The formal church ceremony will happen the next day, watched by millions on live TV. Prince Rainier III and the Princess consort will remain married until her death in 1982.

Grace Patricia Kelly was an American actress who became Princess of Monaco after marrying Prince Rainier III, in April 1956. After embarking on an acting career in 1950, at age 20, Kelly appeared in New York City theatrical productions and more than 40 episodes of live drama productions broadcast during the early 1950s Golden Age of Television. In October 1953, she gained stardom from her performance in the film Mogambo, which won her a Golden Globe Award and an Academy Award nomination in 1954. Subsequently, she had leading roles in five films, including The Country Girl, for which her deglamorized performance earned her an Academy Award for Best Actress. Other films include High Noon with Gary Cooper, Dial M for Murder with Ray Milland, Rear Window with James Stewart, To Catch a Thief with Cary Grant, and High Society with Frank Sinatra and Bing Crosby.

Rainier III ruled the Principality of Monaco for almost 56 years, making him one of the longest ruling monarchs in European history. Though internationally known for his marriage to the American actress Grace Kelly, he was also responsible for reforms to Monaco’s constitution and for expanding the principality’s economy beyond its traditional casino gambling base. Gambling accounts for only approximately three percent of the nation’s annual revenue today; when Rainier ascended the throne in 1949, it accounted for more than 95 percent.