(1614) Pocahontas and John Rolfe marry
Pocahontas, daughter of the Powhatan tribal chief, marries John Rolfe, an English tobacco farmer from Jamestown, Virginia. Native Americans and Virginia’s governor both bless the union, and it will lead to a period of peace.
Pocahontas was a Native American woman notable for her association with the colonial settlement at Jamestown, Virginia. Pocahontas was the daughter of Powhatan, the paramount chief of a network of tributary tribal nations in the Tsenacommacah, encompassing the Tidewater region of Virginia. In a well-known historical anecdote, she saved the life of a captive of the Native Americans, the Englishman John Smith, in 1607 by placing her head upon his own when her father raised his war club to execute him. A large number of historians doubt the veracity of this story.


wiki/Pocahontas
John Rolfe was one of the early English settlers of North America. He is credited with the first successful cultivation of tobacco as an export crop in the Colony of Virginia. Rolfe was born in Heacham, Norfolk, England, as the son of John Rolfe and Dorothea Mason, and was baptised on 6 May 1585. At the time, Spain held a virtual monopoly on the lucrative tobacco trade. Most Spanish colonies in the New World were located in southern climates more favourable to tobacco growth than the English settlements, notably Jamestown. As the consumption of tobacco had increased, the balance of trade between England and Spain began to be seriously affected. Rolfe was one of a number of businessmen who saw the opportunity to undercut Spanish imports by growing tobacco in England’s new colony in Virginia. Rolfe had somehow obtained seeds to take with him from a special popular strain then being grown in Trinidad and South America, even though Spain had declared a penalty of death to anyone selling such seeds to a non-Spaniard. 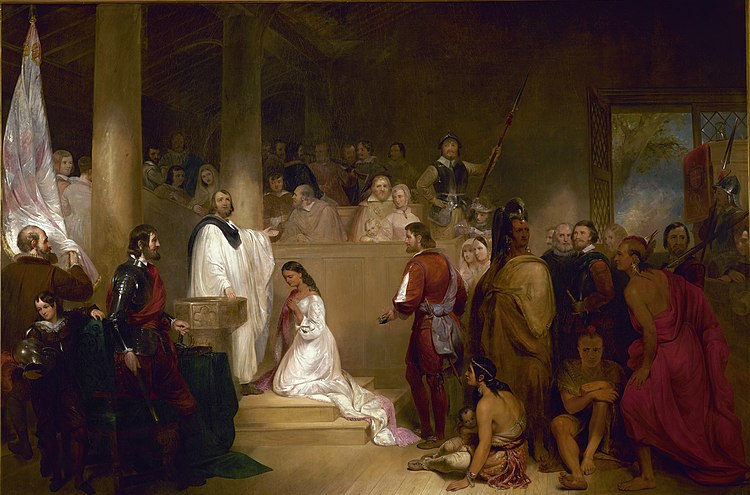 John Gadsby Chapman depicts Pocahontas, wearing white, being baptized Rebecca by Anglican minister Alexander Whiteaker in Jamestown, Virginia; this event is believed to have taken place in 1613 or 1614. She kneels, surrounded by family members and colonists. Her brother Nantequaus turns away from the ceremony. The baptism took place before her marriage to Englishman John Rolfe, who stands behind her. Their union is said to be the first recorded marriage between a European and a Native American. The scene symbolizes the belief of Americans at the time that Native Americans should accept Christianity and other European ways.
Chapman (1808-1889), born in Alexandria, Virginia, studied art in Italy and became known for his portrait and historical paintings and his rich use of color.
The dimensions of this oil painting on canvas are 365.76 cm by 548.64 cm (144.00 in by 216.00 in).
4.9.a18