(1960) France joins the ‘nuclear club’ with bomb test
Gerboise Bleue is exploded in the Algerian Sahara desert, and at 70 kilotons is the largest atomic weapon test yet seen. The French now have The Bomb, along with the United States, the Soviet Union, and the United Kingdom.

Gerboise Bleue was the name of the first French nuclear test. It was an atomic bomb detonated near Reggane, in the middle of the Algerian Sahara desert on 13 February 1960, during the Algerian War (1954–62). General Pierre Marie Gallois was instrumental in the endeavour, and earned the nickname of père de la bombe A (“father of the A-bomb”).

Gerboise is the French word for jerboa, a desert rodent found in the Sahara, while blue is the first color of the French tricolor flag. The second and third bombs were named respectively “white” (Gerboise Blanche) and “red” (Gerboise Rouge), the remaining colors of the flag. 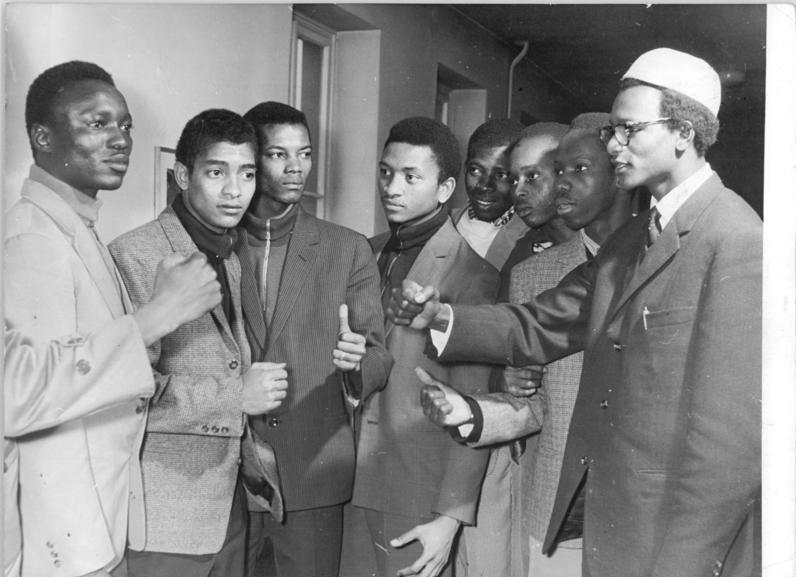 Central image Schaar 13.2.1960 Protest against Saharan bomb. A wave of outrage and protest sparked news of the explosion of the first French atomic bomb in the Sahara among African students at the Leipzig Karl Marx University. Shown here: Barry Seydou (right), a student from the Mali Federation, pointed out with excited words that his hometown is only about 300 km from the dropping point of the French atomic bomb, “the African peoples need no atomic bomb Living peace and calling for the immediate end of colonial rule in Africa. “
wiki/Gerboise_Bleue
4.8.d17