(1831) Nat Turner leads a violent revolt against slavery
Acting on visions from God, Virginia plantation slave Nat Turner and seven supporters begin an armed insurrection that will last two days, rally at least 70 more recruits to the cause, result in the reported deaths of 60 whites, and end in Turner’s capture and hanging.
Nat Turner’s Rebellion was a slave rebellion that took place in Southampton County, Virginia, in August 1831, led by Nat Turner. Rebel slaves killed from 55 to 65 people, at least 51 being white. The rebellion was put down within a few days, but Turner survived in hiding for more than two months afterwards. The rebellion was effectively suppressed at Belmont Plantation on the morning of August 23, 1831. 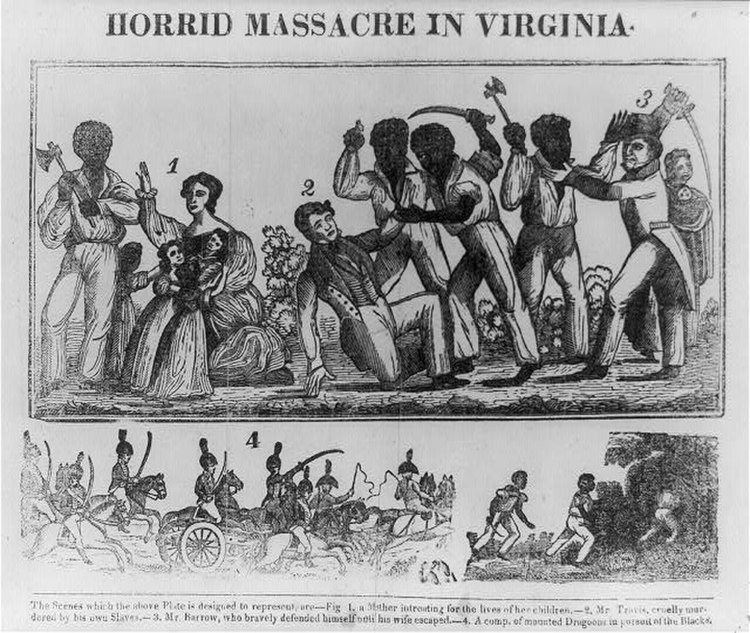 19th Century woodcut depiction of the Southampton Insurrection. Note part of the upper part of this woodcut was later reused in 1835/1836 during the Seminole War
wiki/Nat_Turner’s_slave_rebellion
4.15.A18
(1831) Nat Turner leads a violent revolt against slavery.
Also on this day,

1883 | Out of tragedy rises Mayo Clinic center of healing

A humid summer day turns tragic as an F5 tornado bears down on Rochester, Minnesota. After caring for casualties in an area with no hospital, Dr. William Mayo and his sons will be inspired to team with local nuns and open a medical facility that evolves into the world-renowned Mayo Clinic.

Vincenzo Peruggia, an employee at Paris’ Louvre museum, hides in the broom closet until the museum closes, then leaves the premises with Leonardo da Vinci’s ‘Mona Lisa’ tucked under his large coat. He’ll keep the priceless masterpiece in a trunk in his apartment for two years before being captured.

1968 | The USSR puts a chokehold on Czechoslovakia Prague Spring

Hopes for a freer society are brutally quashed as Warsaw Pact tanks and hundreds of thousands of troops thunder through the street of Prague, Czechoslovakia. Democratic reforms that began seven months earlier as the ‘Prague Spring’ are now crushed in the iron grip of Soviet domination.

(1968) The USSR puts a chokehold on Czechoslovakia
Hopes for a freer society are brutally quashed as Warsaw Pact tanks and hundreds of thousands of troops thunder through the street of Prague, Czechoslovakia. Democratic reforms that began seven months earlier as the 'Prague Spring' are now crushed in the iron grip of Soviet domination.
The Prague Spring was a period of political liberalization in Czechoslovakia during the era of its domination by the Soviet Union after World War II. It began on 5 January 1968, when reformist Alexander Dubček was elected First Secretary of the Communist Party of Czechoslovakia, and continued until 21 August 1968 when the Soviet Union and other members of the Warsaw Pact invaded the country to halt the reforms.