(1944) French capital drives out Nazi control
The Nazi occupation of ‘the City of Light’ nears its end as the French Resistance mobilizes fighting units against the German garrison in advance of the arrival of US General Patton’s Third Army. As they withdraw their forces, German commanders will ignore Hitler’s order to destroy Paris.
The Liberation of Paris was a military action that took place during World War II from 19 August 1944 until the German garrison surrendered the French capital on 25 August 1944. Paris had been ruled by Nazi Germany since the signing of the Second Compiègne Armistice on 22 June 1940, after which the Wehrmacht occupied northern and western France. 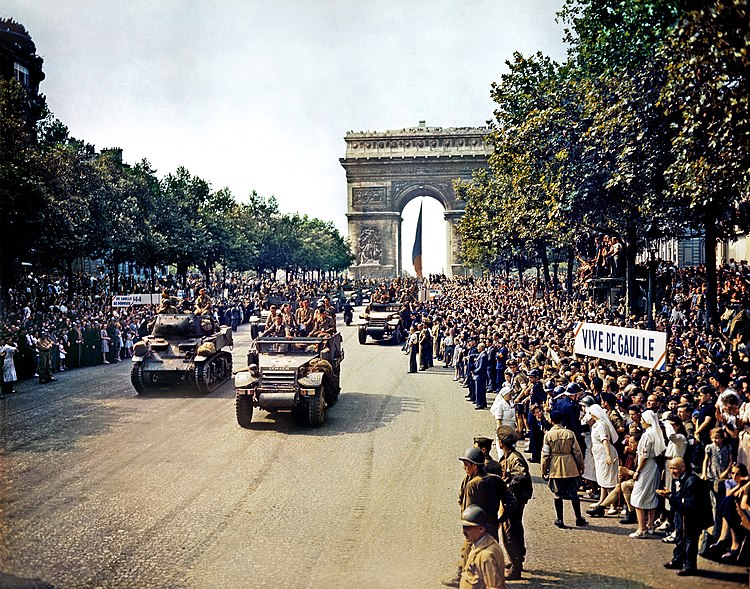 Crowds of French patriots line the Champs Elysees to view Free French tanks and half tracks of General Leclerc’s 2nd Armored Division passes through the Arc du Triomphe, after Paris was liberated on August 26, 1944. Among the crowd can be seen banners in support of Charles de Gaulle.
wiki/Liberation_of_Paris
4.15.A18
(1944) French capital drives out Nazi control.
Also on this day,

A presidential proclamation from Franklin Delano Roosevelt designates August 19 as National Aviation Day. The day marks Orville Wright’s birthday and encourages citizens to ‘observe the day with activities that promote interest in aviation.’

1934 | Homemade rattling racers roll in a glide to the finish

Dayton, Ohio, hosts the inaugural All-American Soap Box Derby, and 362 entrants have cobbled together racers made of packaging crates, buggy wheels, scrap metal, and yes, soap boxes. Gravity does the work as none of the cars are powered, so aerodynamics and wheel quality are key.

Communist hardliners, unhappy with President Mikhail Gorbachev’s policies, attempt to take over the Soviet Union’s government. Tanks patrol Moscow, Gorbachev is placed under house arrest, and tens of thousands of citizens are out in the streets protesting against the coup.

(1991) 'August Coup' puts Soviet President Gorbachev under arrest
Communist hardliners, unhappy with President Mikhail Gorbachev's policies, attempt to take over the Soviet Union's government. Tanks patrol Moscow, Gorbachev is placed under house arrest, and tens of thousands of citizens are out in the streets protesting against the coup.
The 1991 Soviet coup d'état attempt, also known as the August Coup, was an attempt by members of the Soviet Union's government to take control of the country from Soviet President and General Secretary Mikhail Gorbachev. The coup leaders were hard-line members of the Communist Party of the Soviet Union who were opposed to Gorbachev's reform program and the new union treaty that he had negotiated which decentralised much of the central government's power to the republics. They were opposed, mainly in Moscow, by a short but effective campaign of civil resistance. Although the coup collapsed in only two days and Gorbachev returned to government, the event destabilised the Soviet Union and is widely considered to have contributed to both the demise of the CPSU and the dissolution of the Soviet Union.