(1969) America’s Gulf Coast is slammed by monster storm
A monstrous Category 5 hurricane, whose vortex of clouds fills almost the entire Gulf of Mexico, packs 175-mph winds and pushes a storm surge 24 feet high as it rages into the US at the mouth of the Mississippi River. In the end, Camille will kill 259 and cause $1.42 billion in damage.
Hurricane Camille was the second-most intense tropical cyclone to strike the United States on record. The most intense storm of the 1969 Atlantic hurricane season, Camille formed as a tropical depression on August 14 south of Cuba from a long-tracked tropical wave. Located in a favorable environment for strengthening, the storm quickly intensified into a Category 2 hurricane before striking the western part of the nation on August 15. Emerging into the Gulf of Mexico, Camille underwent another period of rapid intensification and became a Category 5 hurricane the next day as it moved northward towards the Louisiana–Mississippi region. Despite weakening slightly on August 17, the hurricane quickly re-intensified back to a Category 5 before it made landfall in Pass Christian, Mississippi early on August 18 with a pressure of 900 mbar. This was the second-lowest pressure recorded for a U.S. landfall; only the 1935 Labor Day hurricane had a lower pressure at landfall. As Camille pushed inland, it quickly weakened and was a tropical depression by the time it was over the Ohio Valley. Once it emerged offshore, it was able to restrengthen to a strong tropical storm, before it became extratropical, being absorbed by a cold front over the North Atlantic on August 22.

For 1 minute and 20 seconds, Parisians gaze on a fanciful figure seemingly drawn from chalk who morphs and leaps, changing form in amusing and amazing ways in ‘Fantasmagorie,’ a stream-of-consciousness silent film that will come to be regarded as the first animated cartoon.

1945 | Dutch face a revolution in a long-held colony

An end to more than three centuries of Dutch colonization and control is declared by the Indonesian National Revolution and its leaders Sukarno and Mohammad Hatta. WWII had weakened the Netherlands’ hold on the Southeast Asian archipelago and now Indonesia heads towards independence.

A new cool modality unfurls on Miles Davis’ latest album, ‘Kind of Blue.’ Davis’ brilliant horn playing, and his sublime supporting ensemble, including Bill Evans and John Coltrane, will make the disc an enduring success, and it will be considered by some the greatest jazz record of all time.

(1945) Dutch face a revolution in a long-held colony
An end to more than three centuries of Dutch colonization and control is declared by the Indonesian National Revolution and its leaders Sukarno and Mohammad Hatta. WWII had weakened the Netherlands' hold on the Southeast Asian archipelago and now Indonesia heads towards independence.
The Indonesian National Revolution or Indonesian War of Independence was an armed conflict and diplomatic struggle between the Republic of Indonesia and the Dutch Empire, and an internal social revolution following the postwar and postcolonial Indonesia. It took place between Indonesia's declaration of independence in 1945 and the Dutch recognition of Indonesia's independence at the end of 1949. The Indonesian independence movement began in May 1908, which is commemorated as the "Year of National Awakening". 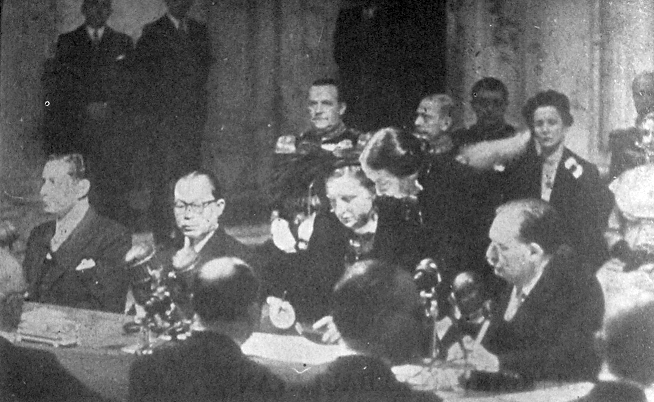 The signing ceremony recognizing Indonesian sovereignty in The Hague, 27 December 1949