(64 CE) A blaze flares up in the twisting streets of Rome
The moon is full, the wind high, and when a fire breaks out in a shop stocking explosives, it soon whips into a conflagration in the narrow streets and packed neighborhoods of Rome. The fire will rage for six days, but contrary to popular belief, Emperor Nero will not fiddle around.
The Great Fire of Rome was an urban fire in July of the year AD 64. It caused widespread devastation in the city on 19 July, before being brought under control after six days. Differing accounts either blame Emperor Nero for initiating the fire or credit him with organizing measures to contain it and provide relief for refugees. According to Tacitus and later Christians, Nero blamed the devastation on the Christian community in the city, initiating the empire’s first persecution against the Christians. 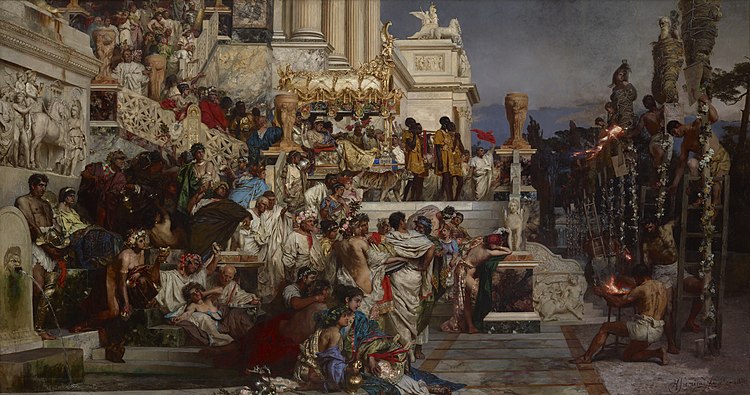 Nero’s Torches by Henryk Siemiradzki. According to Tacitus, Nero targeted Christians as those responsible for the fire.
wiki/Great_Fire_of_Rome
4.13.j18
(64 CE) A blaze flares up in the twisting streets of Rome.
Also on this day,

A massive English warship, the 800-ton Mary Rose, has given more than three decades of service to king and country when she is sunk in battle just off the Isle of Wight. The ship will be painstakingly raised from the deep and reconstructed as a breathtaking Tudor time capsule 437 years later.

Crowds gather in Seneca Falls, New York, for the opening of a two-day Women’s Rights Convention, the first of its kind ever held in America. Prominent speakers, including Elizabeth Cady Stanton and Lucretia Mott, will call for equal rights for women, including the right to vote.

William Hanna and Joseph Barbera release a new cartoon, ‘The Midnight Snack,’ featuring a cat named Tom and a mouse named Jerry. The characters had appeared in a previous cartoon as Jasper and Jinx. The new names will stick, and the feuding animals will appear in more than 150 shorts and several spinoffs.

(1848) Seneca Falls hosts a watershed moment in women's rights
Crowds gather in Seneca Falls, New York, for the opening of a two-day Women's Rights Convention, the first of its kind ever held in America. Prominent speakers, including Elizabeth Cady Stanton and Lucretia Mott, will call for equal rights for women, including the right to vote.
The Seneca Falls Convention was the first women's rights convention. It advertised itself as "a convention to discuss the social, civil, and religious condition and rights of woman". Held in Seneca Falls, New York, it spanned two days over July 19–20, 1848. Attracting widespread attention, it was soon followed by other women's rights conventions, including the Rochester Women's Rights Convention in Rochester, New York, two weeks later. In 1850 the first in a series of annual National Women's Rights Conventions met in Worcester, Massachusetts.