(1415) Weary English soldiers outnumbered by French on St. Crispin’s Day
England’s King Henry V charges into a battle that sees his troops dangerously outnumbered by the French on the fields of Agincourt. Thickets of longbows send arrows flying at the French and before the day’s end the English secure one of their greatest, and most improbable, military wins.
The Battle of Agincourt (UK:; US:; French: Azincourt) was a major English victory in the Hundred Years’ War. It took place on 25 October 1415 in the County of Saint-Pol, Artois, some 40 km south of Calais. England’s unexpected victory at Agincourt against a numerically superior French army boosted English morale and prestige, crippled France, and started a new period in the war during which the English began enjoying great military successes.

The battle of Agincourt
wiki/Battle_of_Agincourt
4.15.A18
(1415) Weary English soldiers outnumbered by French on St. Crispin’s Day.
Also on this day,

Catholic Archbishop Francis J.L. Beckman of Dubuque, Iowa, lets it be known that he is not a fan of a newfangled national craze. He claims it is “turned loose to gnaw away at the moral fiber of young people,” and that swing music will catapult fans down a “primrose path to hell.”

1978 | Michael Myers goes home for the holiday as ‘Halloween’ premieres

Moviegoers in Kansas City, Missouri, attend the premiere of John Carpenter’s low-budget horror film, titled appropriately enough for the season, ‘Halloween.’ Those expecting a cheesy gore fest are instead treated to a masterful take on the genre, and some of the best scares since ‘Psycho.’

The small Caribbean island nation of Grenada has been embroiled in a political power struggle for months, and with the revolutionary prime minister now murdered, the island is invaded by more than 7,000 troops in the largest US military engagement since Vietnam. The invading forces will claim victory within weeks.

(1983) Operation Urgent Fury sends US invasion force to Caribbean
The small Caribbean island nation of Grenada has been embroiled in a political power struggle for months, and with the revolutionary prime minister now murdered, the island is invaded by more than 7,000 troops in the largest US military engagement since Vietnam. The invading forces will claim victory within weeks.
The Invasion of Grenada was a 1983 United States–led invasion of the Caribbean island nation of Grenada, which has a population of about 91,000 and is located 160 kilometres north of Venezuela, that resulted in a U.S. victory within a matter of weeks. Codenamed Operation Urgent Fury, it was triggered by the internal strife within the People's Revolutionary Government that resulted in the house arrest and the execution of the previous leader and second Prime Minister of Grenada Maurice Bishop, and the establishment of a preliminary government, the Revolutionary Military Council with Hudson Austin as Chairman. The invasion resulted in the appointment of an interim government, followed by democratic elections in 1984. The country has remained a democratic nation since then. 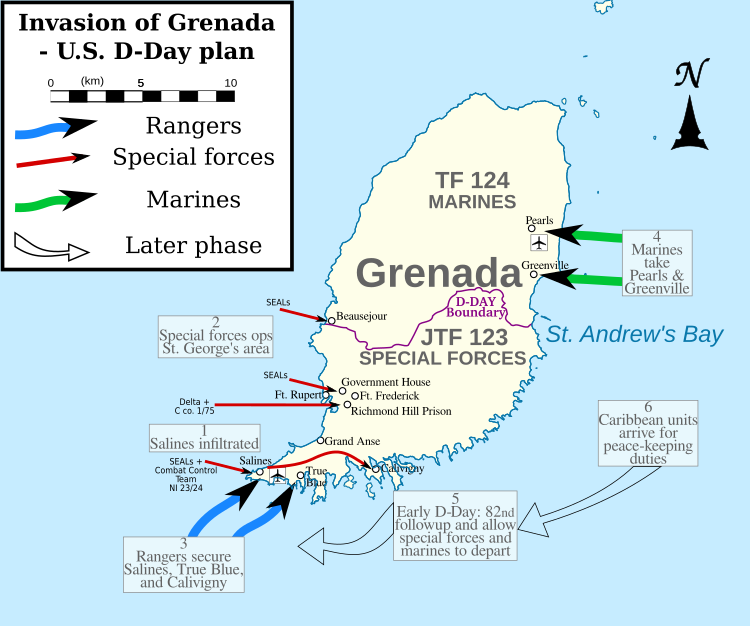 (1978) Poland’s Cardinal Wojtyła inaugurated as pope
Elected six days earlier, Karol Józef Wojtyła, 58, is now inaugurated as Pope John Paul II, the first non-Italian pope in 455 years and the second youngest in history. His pontificate will last 26 years, take him to 129 countries, and lead to sainthood less than a decade after his death.
Pope John Paul II served as Pope and sovereign of the Vatican City State from 1978 to 2005. 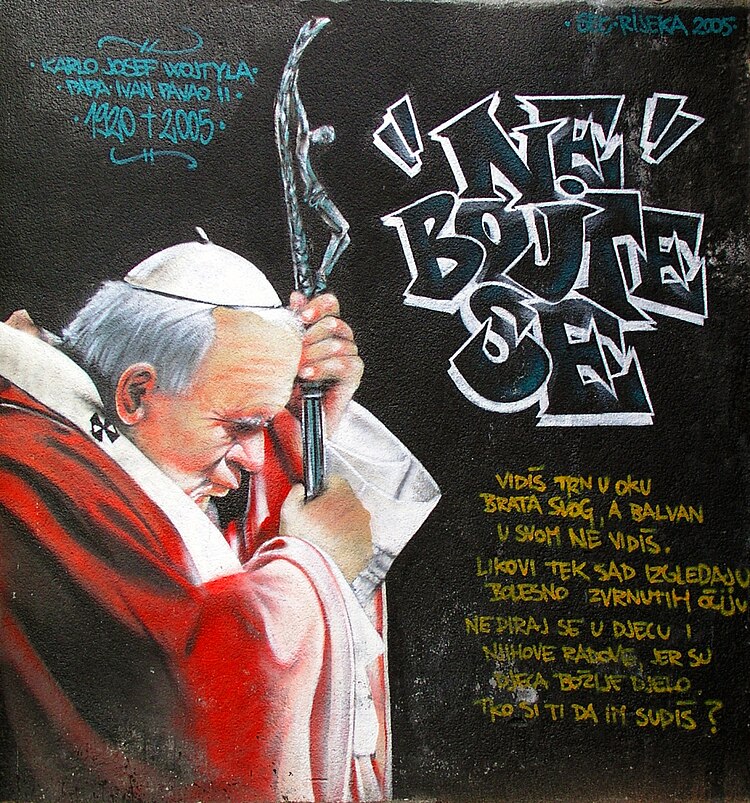 Graffiti showing Pope John Paul II with quote “Do not be afraid” in Rijeka, Croatia
wiki/Pope_John_Paul_II
4.15.A18
(1978) Poland’s Cardinal Wojtyła inaugurated as pope.
Also on this day,

Inspired by his time confined behind the high ramparts of a Hungarian prison, French balloonist André-Jacques Garnerin floats 3,200 feet above Paris, releases the hydrogen balloon from his new invention the parachute, and under a 23-foot wide canopy he descends safely to the ground.

1910 | Dr. Crippen convicted as a body buried in the basement leads to conviction

Months after Dr. Crippen’s spouse disappeared, police turn up human remains buried in the basement of his home. Today, after a sensational trial at London’s Old Bailey, it takes the jury only 27 minutes to find Hawley Harvey Crippen guilty of murdering his wife.

1964 | French existentialist turns down his Nobel Prize as Sartre wins

Arguably one of the most notable public intellectuals of the 20th century, Jean-Paul Sartre, is this year’s winner of the Nobel Prize in Literature for work the committee deems ‘filled with the spirit of freedom.’ The French philosopher exercises this same spirit and declines the honor.

(1797) A gutsy parachutist takes a plunge over Paris
Inspired by his time confined behind the high ramparts of a Hungarian prison, French balloonist André-Jacques Garnerin floats 3,200 feet above Paris, releases the hydrogen balloon from his new invention the parachute, and under a 23-foot wide canopy he descends safely to the ground.
André-Jacques Garnerin was a French balloonist and the inventor of the frameless parachute. He was appointed Official Aeronaut of France. Garnerin was born in Paris. He was captured by British troops during the first phase of the French Revolutionary Wars 1792–1797, turned over to the Austrians and held as a prisoner of war in Buda in Hungary for three years.