When explorers from Portugal landed on the shores of what is now Brazil in 1500, the Atlantic Forest, seen here, is what greeted them. Before colonization, the forest the Portuguese called ‘Mata Atlântica’ is estimated to have covered nearly 400,000 square miles, and possibly as many as 600,000. As Brazil celebrates its independence today, the Atlantic Forest is in peril–85 percent of it has been destroyed to make room for agriculture and development.

(1822) Brazil declares independence from Portugal
Prince Dom Pedro declares Brazil’s independence from Portugal in a dramatic fashion, unsheathing his sword and announcing, ‘For my blood, my honor, my God, I swear to give Brazil freedom.’ A few weeks later, he will be crowned Pedro I, though a formal treaty won’t come for three years.
Brazil, officially the Federative Republic of Brazil, is the largest country in both South America and Latin America. At 8.5 million square kilometers and with over 208 million people, Brazil is the world’s fifth-largest country by area and the sixth most populous. The capital is Brasília, and the most populated city is São Paulo. The federation is composed of the union of the Federal District, the 26 states, and the 5,570 municipalities. It is the largest country to have Portuguese as an official language and the only one in the Americas, besides being one of the most multicultural and ethnically diverse nations, due to the strong immigration from various places in the world. 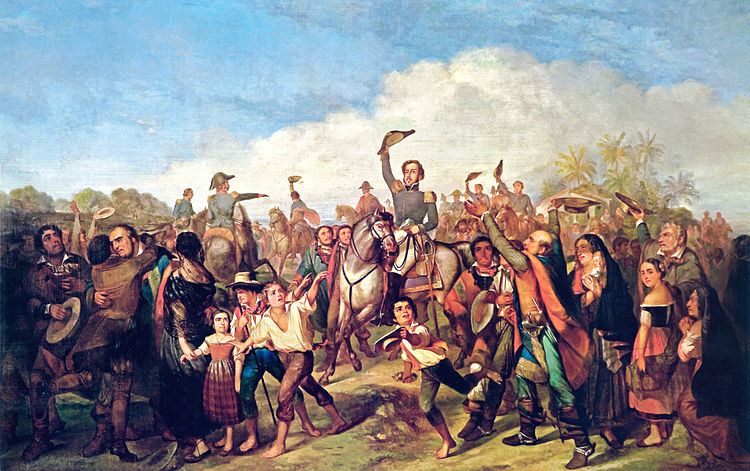 Prince Pedro is surrounded by a cheering crowd in São Paulo after giving the news of the Brazilian independence on 7 September 1822
wiki/Brazil
4.15.A18
(1822) Brazil declares independence from Portugal.
Also on this day,

Bombs rain down on the British capital in a ‘lightning war,’ or ‘blitzkrieg,’ a favored tactic for the intimidation of Germany’s enemies. And while Hitler’s Luftwaffe will keep up the relentless attack for more than eight months, London’s populace will rise to the challenge of the Blitz.

Canton, Ohio, birthplace of the National Football League, opens the Pro Football Hall of Fame in homage to a sport that’s really catching on with the American public. Seventeen of the best players are inducted in the first ceremony, including Red Grange, Curly Lambeau, and Jim Thorpe.

1979 | Cable viewers get an all-sports network as ESPN launches

‘If you love sports…if you really love sports, you’ll think you’ve died and gone to sports heaven.’ With those words, anchor Lee Leonard introduces the small cable TV audience to the ESPN network and its highlights show, ‘SportsCenter,’ followed by a slow-pitch softball game.

(1940) Nazi Germany unleashes a blitzkrieg on London
Bombs rain down on the British capital in a 'lightning war,' or 'blitzkrieg,' a favored tactic for the intimidation of Germany's enemies. And while Hitler's Luftwaffe will keep up the relentless attack for more than eight months, London's populace will rise to the challenge of the Blitz.
The Blitz refers to bombing by the Luftwaffe over Britain in 1940 and 1941, during the Second World War. The term was first used by the British press as an abbreviation of Blitzkrieg. The Germans conducted a mass air offensive against industrial targets, towns and cities, which began with raids on London towards the end of the Battle of Britain, a battle for air superiority over the United Kingdom. By September 1940 the Luftwaffe had failed to gain air superiority and the German air fleets were ordered to attack London, to draw RAF Fighter Command into a battle of annihilation. Adolf Hitler and Reichsmarschall Hermann Göring, commander-in-chief of the Luftwaffe, ordered the new policy on 6 September 1940. From 7 September 1940, London was systematically bombed by the Luftwaffe for 56 out of the following 57 days and nights. In a large daylight attack against London on 15 September, many German aircraft were shot down.

Air Raid Damage in Britain during the Second World War St Paul's Cathedral, rising above the bombed London skyline, is shrouded in smoke during the Blitz. The photograph was taken from the roof of the Daily Mail offices in Fleet Street