(1838) Frederick Douglass escapes slavery, heads north to freedom
Born a slave in Maryland, future statesman and abolitionist Frederick Douglass makes his third attempt to escape his bonds and head north. Dressed as a sailor and carrying false identification papers, he boards a train in Baltimore and in 24 hours will arrive at a safe house in New York City.
Frederick Douglass was an American social reformer, abolitionist, orator, writer, and statesman. After escaping from slavery in Maryland, he became a national leader of the abolitionist movement in Massachusetts and New York, gaining note for his oratory and incisive antislavery writings. In his time, he was described by abolitionists as a living counter-example to slaveholders’ arguments that slaves lacked the intellectual capacity to function as independent American citizens. Northerners at the time found it hard to believe that such a great orator had once been a slave.

The Treaty of Paris is signed, granting Great Britain’s former colonies freedom, and ending an 8-year war. Benjamin Franklin and John Adams are in the French capital acting for the United States, while Britain has sent a delegation that will refuse to sit for the official portrait.

1935 | A speed demon takes to the sands of Bonneville

Bandleader Tommy Dorsey made a good choice when he picked a skinny Hoboken kid as his singer, but Dorsey’s insistence on a contract for one-third royalties on all lifetime earnings has the singer itching to go solo. Frank Sinatra does just that, as Dorsey replaces him with Dick Haymes.

(1783) Great Britain officially loses its rebellious colonies
The Treaty of Paris is signed, granting Great Britain's former colonies freedom, and ending an 8-year war. Benjamin Franklin and John Adams are in the French capital acting for the United States, while Britain has sent a delegation that will refuse to sit for the official portrait.

The Treaty of Paris, signed in Paris by representatives of King George III of Great Britain and representatives of the United States of America on September 3, 1783, ended the American Revolutionary War. The treaty set the boundaries between the British Empire in North America and the United States, on lines "exceedingly generous" to the latter. Details included fishing rights and restoration of property and prisoners of war.

This treaty and the separate peace treaties between Great Britain and the nations that supported the American cause — France, Spain, and the Dutch Republic — are known collectively as the Peace of Paris. Only Article 1 of the treaty, which acknowledges the United States' existence as free sovereign and independent states, remains in force. 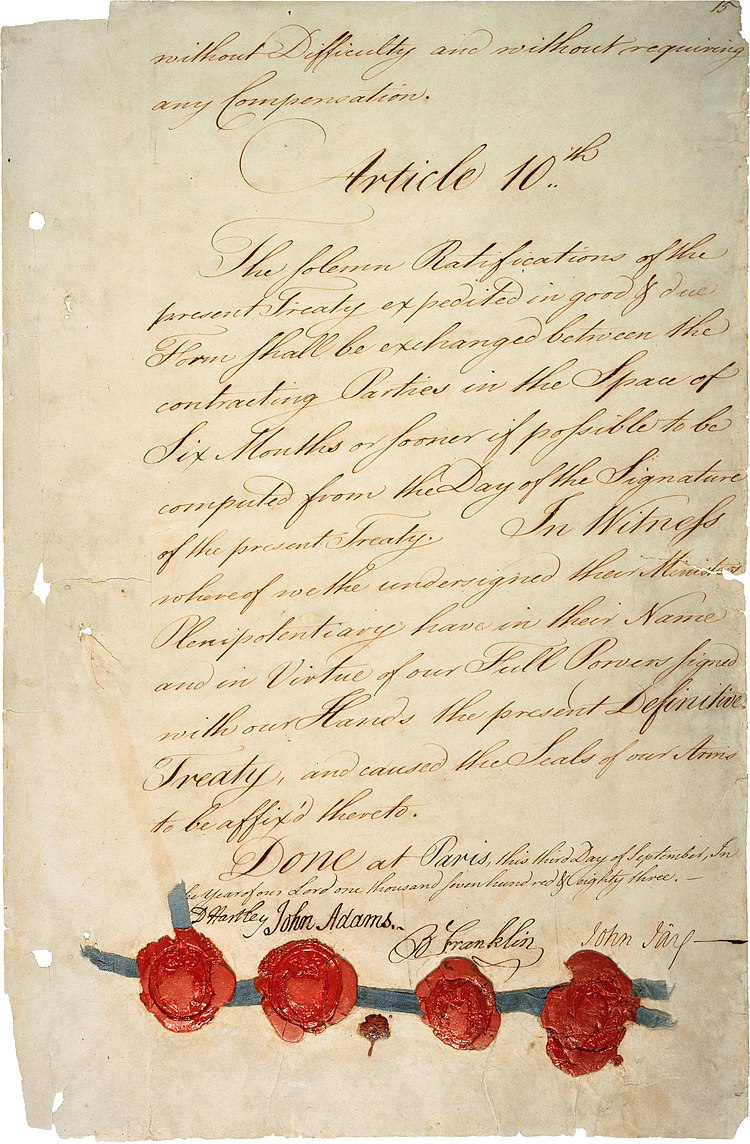