(1936) Journalists rank college football
The Associated Press releases a poll of 35 sportswriters evaluating American college football teams, and the Minnesota Golden Gophers take the top spot. The AP Poll will become the premier ranking system for both collegiate football and basketball, and will never fail to spark an argument.
The Associated Press provides weekly rankings of the top 25 NCAA teams in one of three Division I college sports: football, men’s basketball and women’s basketball. The rankings are compiled by polling 65 sportswriters and broadcasters from across the nation. Each voter provides his own ranking of the top 25 teams, and the individual rankings are then combined to produce the national ranking by giving a team 25 points for a first place vote, 24 for a second place vote, and so on down to 1 point for a twenty-fifth place vote. Ballots of the voting members in the AP Poll are made public. 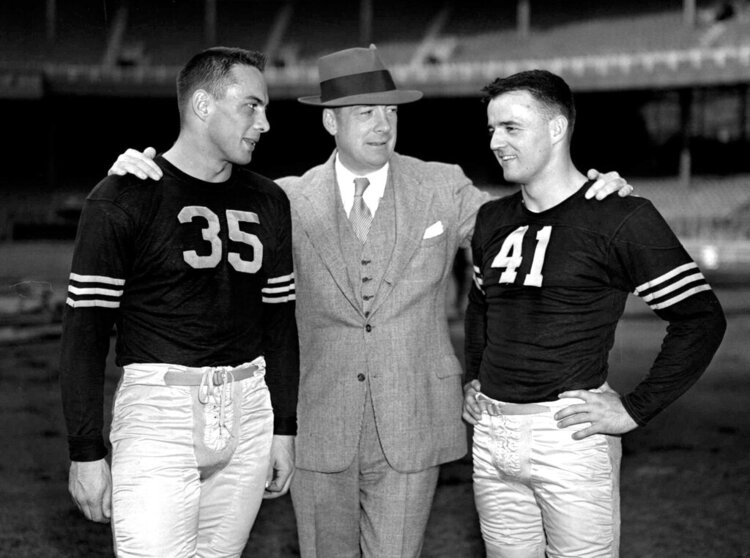 The Associated Press college football poll was created in 1936 to try to answer the simplest yet most divisive question in sports: Who’s better? The poll helped give a regional sport more of a national scope and helped define the Army-Notre Dame rivalry.
wiki/AP_Poll
4.15.A18
(1936) Journalists rank college football.
Also on this day,

1386 | Teaching begins at Germany’s newest university as Heidelberg U. opens

Germany’s Heidelberg University holds its first lecture today and will do so for centuries to come, surviving the Black Death that will ravage the continent, France’s destruction of the city, the chaos of the Protestant Reformation, and the cataclysm of two world wars.

Software entrepreneur David Cook opens his first video rental store in Dallas, offering customers a streamlined experience and large selection. The Blockbuster chain will grow to more than 8,000 stores by 2010 before competition from online and streaming services run it virtually out of business.

Hong Kong’s stock market is the first domino to fall in a cascade of global financial markets sent tumbling by a combination of faulty computer-assisted trading, oil price fluctuations, missile attacks on US vessels, and even a cyclone in the UK. The Dow Jones falls by a precipitous 508 points, or more than 22 percent.

(1987) Mayhem strikes Wall Street and world markets
Hong Kong's stock market is the first domino to fall in a cascade of global financial markets sent tumbling by a combination of faulty computer-assisted trading, oil price fluctuations, missile attacks on US vessels, and even a cyclone in the UK. The Dow Jones falls by a precipitous 508 points, or more than 22 percent.
In finance, Black Monday refers to Monday, October 19, 1987, when stock markets around the world crashed, shedding a huge value in a very short time. The crash began in Hong Kong and spread west to Europe, hitting the United States after other markets had already declined by a significant margin. The Dow Jones Industrial Average fell exactly 508 points to 1,738.74. In Australia and New Zealand, the 1987 crash is also referred to as "Black Tuesday" because of the time zone difference.

Timeline compiled by the Federal Reserve.