(1964) Confrontation in waters off Vietnam escalates a war
The Pentagon reports that North Vietnamese torpedo boats have fired on the USS Maddox as it patroled off the north coast of Vietnam in the Gulf of Tonkin. The incident will result in a rapid escalation of the Vietnam War but questions about the Pentagon’s report will linger.
The Gulf of Tonkin incident, also known as the USS Maddox incident, was an international confrontation that led to the United States engaging more directly in the Vietnam War. It involved either one or two separate confrontations involving North Vietnam and the United States in the waters of the Gulf of Tonkin. The original American report blamed North Vietnam for both incidents, but eventually became very controversial with widespread belief that at least one, and possibly both incidents were false, and possibly deliberately so. On August 2, 1964, the destroyer USS Maddox, while performing a signals intelligence patrol as part of DESOTO operations, was pursued by three North Vietnamese Navy torpedo boats of the 135th Torpedo Squadron. Maddox fired three warning shots and the North Vietnamese boats then attacked with torpedoes and machine gun fire. Maddox expended over 280 3-inch and 5-inch shells in a sea battle. One U.S. aircraft was damaged, three North Vietnamese torpedo boats were damaged, and four North Vietnamese sailors were killed, with six more wounded. There were no U.S. casualties. Maddox “was unscathed except for a single bullet hole from a Vietnamese machine gun round.” 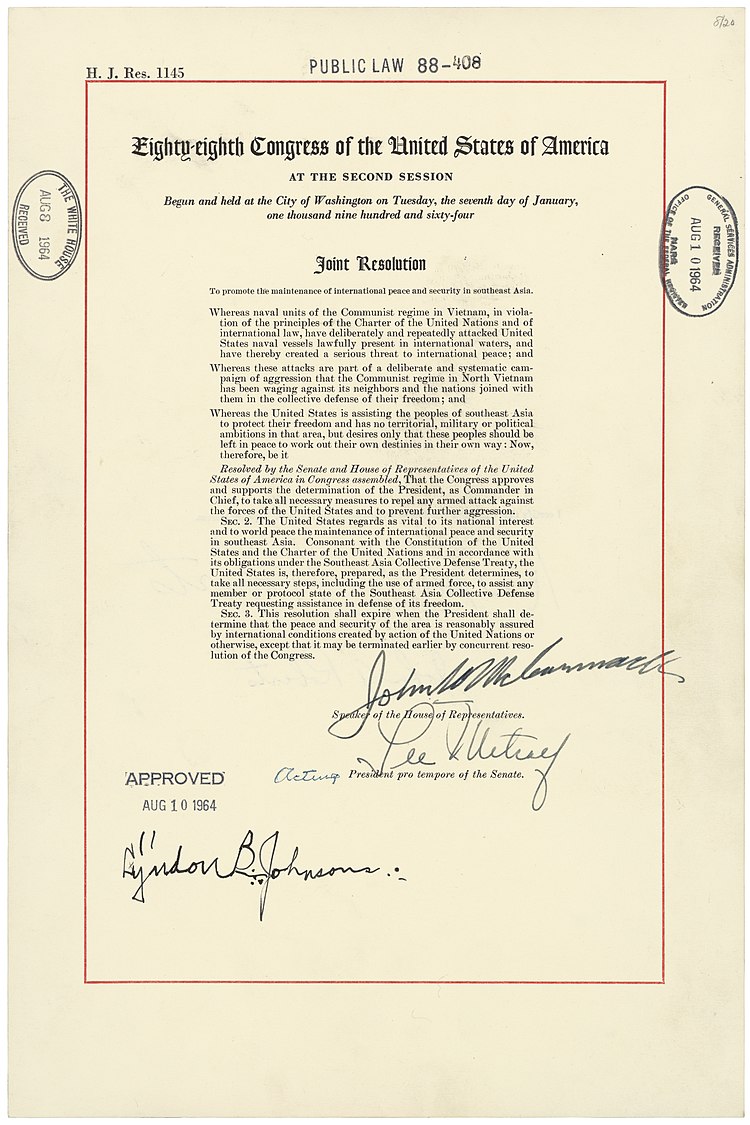 Joint Resolution of Congress, PL 88-408
wiki/Gulf_of_Tonkin_incident
4.13.j18
(1964) Confrontation in waters off Vietnam escalates a war.
Also on this day,

Having marched a great army, complete with war-elephants, over the Alps for a land invasion of Italy two years before, Carthaginian commander Hannibal routs the Romans at the Battle of Cannae, an engagement that historians will claim “set the lines of military tactics for 2,000 years.”

Olivier de Clisson is beheaded in Paris after being found guilty of treason in a controversial trial, and his wife Jeanne de Clisson will take her revenge on the French king by raising her ‘Black Fleet’ and becoming an impressively successful pirate plying the English Channel, hunting down French ships.

Lt. j.g. John F. Kennedy leaps into the Pacific Ocean after a nighttime attack by a Japanese destroyer has sunk his command, the PT-109 patrol torpedo boat. The future US president swims through burning wreckage and manages to help save all but two of his crew, leading survivors to an island to await rescue.

(1943) PT boat is sunk and a young lieutenant helps save mates
Lt. j.g. John F. Kennedy leaps into the Pacific Ocean after a nighttime attack by a Japanese destroyer has sunk his command, the PT-109 patrol torpedo boat. The future US president swims through burning wreckage and manages to help save all but two of his crew, leading survivors to an island to await rescue.
PT-109 was a PT boat last commanded by Lieutenant, junior grade John F. Kennedy in the Pacific Theater during World War II. Kennedy's actions to save his surviving crew after the sinking of PT-109 made him a war hero, which proved helpful in his political career. The incident may have also contributed to his long-term back problems.