(1990) A nation carved up by the Cold War is made whole
In what will later be celebrated as ‘Unity Day,’ a country torn in two after the Second World War is reunited as the once Soviet-controlled East Germany is dissolved and its territory and citizens merged with the Federal Republic of Germany, formerly known as West Germany.
The Day of German Unity is the national day of Germany, celebrated on 3 October as a public holiday. It commemorates the anniversary of German reunification in 1990, when the goal of a united Germany that originated in the middle of the 19th century, was fulfilled again. Therefore, the name addresses neither the re-union nor the union, but the unity of Germany. The Day of German Unity on 3 October has been the German national holiday since 1990, when the reunification was formally completed.

For documentary purposes the German Federal Archive often retained the original image captions, which may be erroneous, biased, obsolete or politically extreme. ADN-ZB-Grimm-3.10.90-Berlin: Vereinigung/Hunderttausende waren dabei, als vor dem Reichstag die schwarz-rot-goldene Bundesfahne gehißt wurde.
wiki/German_Unity_Day
4.15.A18
(1990) A nation carved up by the Cold War is made whole.
Also on this day,

52 BCE | Caesar conquers the Gauls at Battle of Alesia

The Gallic Wars have raged for eight years, with Julius Caesar leading much of the Roman Republic’s charge against the tribes of Gaul in Western Europe. An inability to band together against their common enemy dooms the Gallic tribes, and the struggle ends at the Battle of Alesia.

Stephen Crane’s novel ‘The Red Badge of Courage’ is released in book form for the first time. Not yet born when the Civil War ended, the young author weaves a narrative of America’s great cataclysm, now 30 years gone, with such verisimilitude that critics will call him a master of Realism.

A new Nazi ‘Wunderwaffen,’ or ‘weapon of wonder,’ is fired in a test flight, and the missile’s top 52.5-mile altitude is so high it becomes the first manmade object to enter outer space. In less than two years Germany will begin launching thousands of V-2 rockets, mainly against Belgium and the UK.

(1942) Missile crosses a cosmic threshold
A new Nazi 'Wunderwaffen,' or 'weapon of wonder,' is fired in a test flight, and the missile's top 52.5-mile altitude is so high it becomes the first manmade object to enter outer space. In less than two years Germany will begin launching thousands of V-2 rockets, mainly against Belgium and the UK.
The V-2, technical name Aggregat 4, was the world's first long-range guided ballistic missile. The missile with a liquid-propellant rocket engine was developed during the Second World War in Germany as a "vengeance weapon", assigned to attack Allied cities as retaliation for the Allied bombings against German cities. The V-2 rocket also became the first artificial object to travel into outer space by crossing the Kármán line with the vertical launch of MW 18014 on 20 June 1944. 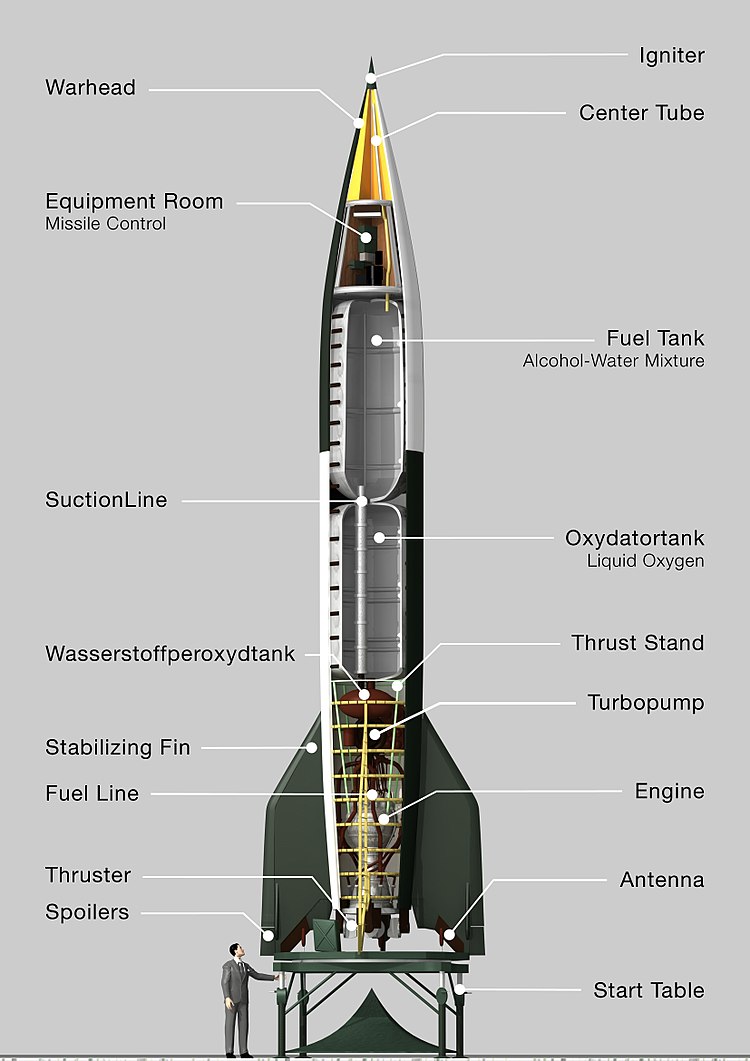 Layout of a V-2 rocket