(1985) Terrorism on the high seas as cruise ship is hijacked
As the Italian cruise liner ‘Achille Lauro’ sails out of Alexandria, Egypt, four Palestinian Liberation Front terrorists hijack it, demanding a passage to Syria. The next day hijackers will murder a wheelchair-bound American tourist, Leon Klinghoffer, sparking worldwide outrage.
The Achille Lauro hijacking happened on October 7, 1985, when the Italian MS Achille Lauro was hijacked by four men representing the Palestine Liberation Front off the coast of Egypt, as she was sailing from Alexandria to Ashdod, Israel. A 69-year-old Jewish American man in a wheelchair, Leon Klinghoffer, was murdered by the hijackers and thrown overboard. The hijacking sparked the “Sigonella Crisis”. 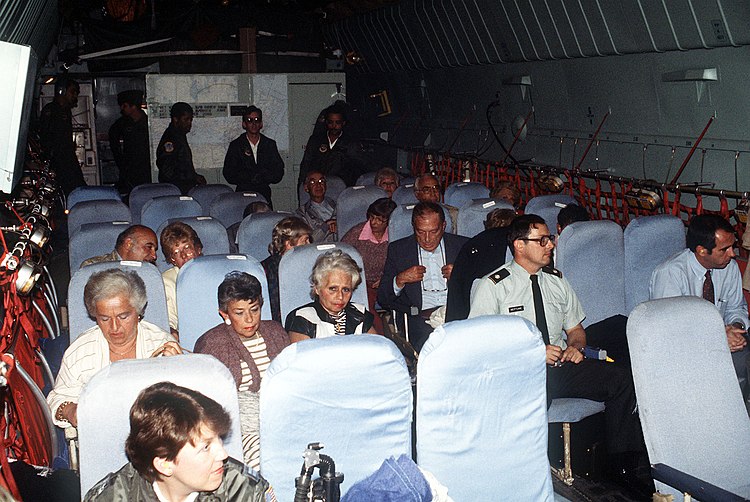 Freed hostages from Achille Lauro returning to the US by military aircraft
wiki/Achille_Lauro_hijacking
4.15.A18
(1985) Terrorism on the high seas as cruise ship is hijacked.
Also on this day,

One of the greatest orators in French history, an enemy of his country’s imperial rulers, and a political dynamo par excellence, Léon Gambetta escapes a Paris under siege during the Franco-Prussian War by boarding a hot-air balloon and floating to relative safety in the city of Tours.

“I saw the best minds of my generation destroyed by madness, starving hysterical naked,” begins Allen Ginsberg as he reads his new poem in public for the first time. Jack Kerouac and the crowd approve, but ‘Howl,’ a seminal Beat Generation work, will spark an obscenity trial.

For the first time in 103 days, the Mississippi River at St. Louis, Missouri, falls below flood stage, marking the end to one of America’s most catastrophic disasters. Upwards of $20 billion in damage will be assessed after floodwaters recede from 30,000 square miles of the Midwest.

(1993) A swollen Mississippi River finally retreats
For the first time in 103 days, the Mississippi River at St. Louis, Missouri, falls below flood stage, marking the end to one of America's most catastrophic disasters. Upwards of $20 billion in damage will be assessed after floodwaters recede from 30,000 square miles of the Midwest.
The Great Mississippi and Missouri Rivers Flood of 1993 occurred in the American Midwest, along the Mississippi and Missouri rivers and their tributaries, from April to October 1993. The flood was among the most costly and devastating to ever occur in the United States, with $15 billion in damages. The hydrographic basin affected over around 745 miles in length and 435 miles in width, totaling about 320,000 square miles. Within this zone, the flooded area totaled around 30,000 square miles and was the worst such U.S. disaster since the Great Mississippi Flood of 1927, as measured by duration, area inundated, persons displaced, crop and property damage, and number of record river levels. In some categories, the 1993 flood even surpassed the 1927 flood, at the time the largest flood ever recorded on the Mississippi. 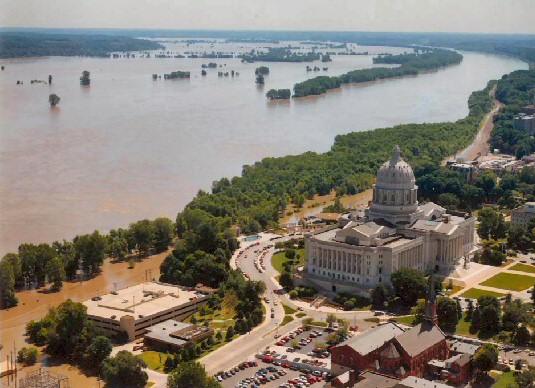 US Army Corp of Engineers photo of the Missouri River's damage to US Highway 63, Jefferson City, Missouri, near the Missouri Capitol building during the "Great Flood of 1993". National Guardsmen created sandbag levees in the parking lot, but the building was still several feet above the water line. Unfortunately, the same could not be said of much of Jefferson City's northern area, and such scenes were repeated over a wide section of the central United States.