(1986) Lebanese magazine breaks story of US arms sales to Iran
The weekly ‘Ash-Shiraa’ reports that the US is secretly selling weapons to Iran in an attempt to get seven American hostages, held in Lebanon, released. The arms-for-hostages story quickly escalates into the Iran-Contra scandal.
The Iran–Contra affair, also referred to as Irangate, Contragate or the Iran–Contra scandal, was a political scandal in the United States that occurred during the second term of the Reagan Administration. Senior administration officials secretly facilitated the sale of arms to Iran, which was the subject of an arms embargo. They hoped, thereby, to fund the Contras in Nicaragua while at the same time negotiating the release of several U.S. hostages. Under the Boland Amendment, further funding of the Contras by the government had been prohibited by Congress.

Reagan meets with (left to right) Secretary of Defense Caspar Weinberger, Secretary of State George Shultz, Attorney General Ed Meese, and Chief of Staff Don Regan in the Oval Office
wiki/Iran–Contra_affair
4.15.A18
(1986) Lebanese magazine breaks story of US arms sales to Iran.
Also on this day,

The horrors of the atomic bombings of Hiroshima and Nagasaki fresh in their minds, Japanese moviegoers confront a new nuclear cataclysm: a prehistoric monster-lizard, resurrected because of nuclear tests in the Pacific, come to ravage Japan yet again. Premiering today in Tokyo, the original film won’t be released in the US until 2004.

A Moscow stray, named Laika, launches into space aboard the Soviet spacecraft Sputnik 2. The dog is sent into orbit to test the effects of space travel on living animals. Unfortunately, no reentry plan exists and Laika dies during the experiment.

The son of a prominent Afghan politician, Hamid Karzai had returned from exile after a US-led coalition toppled the Taliban regime. Chosen to lead the transitional government, he is today officially declared the winner of the constitutionally mandated presidential election.

(1957) Soviet dog becomes first living creature to orbit Earth
A Moscow stray, named Laika, launches into space aboard the Soviet spacecraft Sputnik 2. The dog is sent into orbit to test the effects of space travel on living animals. Unfortunately, no reentry plan exists and Laika dies during the experiment.
Laika was a Soviet space dog who became one of the first animals in space, and the first animal to orbit the Earth. Laika, a stray dog from the streets of Moscow, was selected to be the occupant of the Soviet spacecraft Sputnik 2 that was launched into outer space on November 3, 1957. 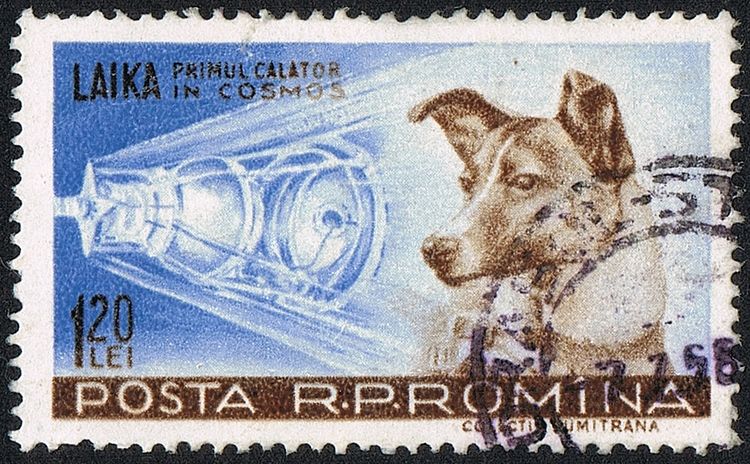 Romanian stamp from 1959 with Laika (the caption reads "Laika, first traveller into Cosmos")