(1924) Computer programming pioneer is born
John Warner Backus is born in Philadelphia. After getting a master’s degree in mathematics from Columbia University, he will lead the team at IBM that invents Fortran—one of the first widely used computer programming languages—and develop other significant advances and research.
John Warner Backus was an American computer scientist. He directed the team that invented and implemented FORTRAN, the first widely used high-level programming language, and was the inventor of the Backus–Naur form, a widely used notation to define formal language syntax. He later did research into the function-level programming paradigm, presenting his findings in his influential 1977 Turing Award lecture “Can Programming Be Liberated from the von Neumann Style?”

What will be known as the Land of Lincoln, Illinois, joins the nation as the 21st state. Although it’s technically a slave-free state, slavery will be tolerated for many years in Illinois until the state Supreme Court gradually emancipates all people living in bondage.

1947 | ‘Streetcar’ opens in NYC as Brando screams, “Stella!” on Broadway and audiences rave

When the curtain falls on the first performance of Tennessee Williams’ play, ‘A Streetcar Named Desire,’ the audience applauds for half an hour. Epic performances will make Marlon Brando, who plays Stanley, an overnight star, and earn Jessica Tandy a Tony for her “incredibly true” portrayal of Blanche DuBois.

Excitement turns deadly as thousands of fans push their way into the Riverfront Coliseum in Cincinnati to see the British rock band the Who. Eleven people, mostly teenagers, are suffocated as the crowd crushes onto the concourse. The band won’t learn of the deaths until after the show.

(1818) Illinois becomes the 21st state in the US
What will be known as the Land of Lincoln, Illinois, joins the nation as the 21st state. Although it's technically a slave-free state, slavery will be tolerated for many years in Illinois until the state Supreme Court gradually emancipates all people living in bondage.
Illinois is a state in the Midwestern region of the United States. It is the 5th most populous state and 25th largest state in terms of land area, and is often noted as a microcosm of the entire country. With Chicago in the northeast, small industrial cities and great agricultural productivity in central and northern Illinois, and natural resources like coal, timber, and petroleum in the south, Illinois has a diverse economic base and is a major transportation hub. The Port of Chicago connects the state to other global ports from the Great Lakes, via the Saint Lawrence Seaway, to the Atlantic Ocean, as well as the Great Lakes to the Mississippi River, via the Illinois Waterway. For decades, O'Hare International Airport has been ranked as one of the world's busiest airports. Illinois has long had a reputation as a bellwether both in social and cultural terms and politics. 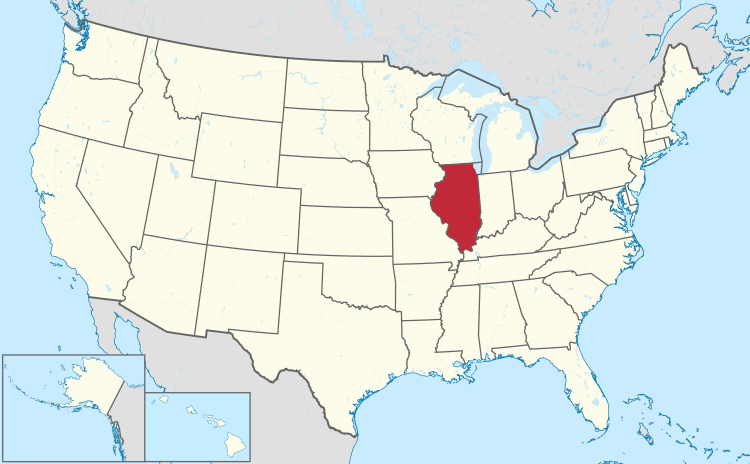 Map of the United States with Illinois highlighted