(1989) United States invades Panama to topple military dictator
The US launches Operation Just Cause to remove Gen. Manuel Noriega from power after he had been indicted on drug trafficking charges. Noriega’s regime will fall in just days, and Noriega himself will be arrested and later sentenced to 40 years in federal prison.
The United States Invasion of Panama, code named Operation Just Cause, was an invasion of Panama by the United States between mid-December 1989 and late January 1990. It occurred during the administration of President George H. W. Bush and ten years after the Torrijos–Carter Treaties were ratified to transfer control of the Panama Canal from the U.S. to Panama by 1 January 2000.

1860 | South Carolina is first state to secede from the Union

In a unanimous vote, the South Carolina legislature enacts an ordinance of secession after Abraham Lincoln is elected president, declaring that in Lincoln they detect a perceived “hostility…to the institution of slavery.” Within months, other slave-holding states will also secede, forming the Confederacy and precipitating the Civil War.

Frank Capra’s film starring James Stewart and Donna Reed debuts at New York’s Globe Theatre. Though not a critical or box office hit right away, it will become a holiday classic, showing in theaters and on TV for decades to come.

The 22-year-old refuses special treatment, despite thousands of fans writing letters asking for this national treasure to be spared. Presley will serve two years and reach the rank of sergeant. An Army pal will introduce him to 14-year-old Priscilla Beaulieu, whom he will later marry.

(1860) South Carolina is first state to secede from the Union
In a unanimous vote, the South Carolina legislature enacts an ordinance of secession after Abraham Lincoln is elected president, declaring that in Lincoln they detect a perceived "hostility…to the institution of slavery." Within months, other slave-holding states will also secede, forming the Confederacy and precipitating the Civil War.
South Carolina was the first state to secede from the Union, and was one of the founder members of the Confederacy. The bombardment of the beleaguered U.S. garrison at Fort Sumter in Charleston Harbor on April 12, 1861 is normally reckoned as the first military engagement of the war. 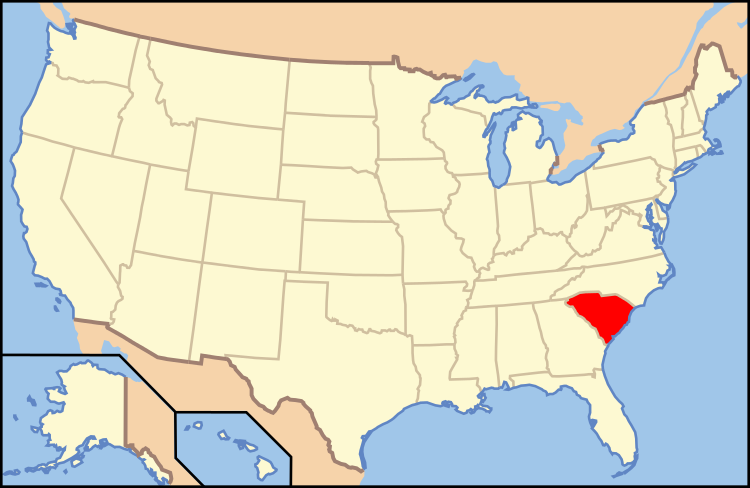 Map of the United States with South Carolina highlighted.