(1897) Mark Twain is still very much alive
Accomplished man of American letters, and possessor of an impressively arid wit, Mark Twain recounts for the New York Journal a visit from a journalist who mistakenly believed the author might be deceased. “The report of my death was an exaggeration,” Twain tells the reporter.
Samuel Langhorne Clemens, better known by his pen name Mark Twain, was an American writer, humorist, entrepreneur, publisher, and lecturer. Among his novels are The Adventures of Tom Sawyer and its sequel, the Adventures of Huckleberry Finn, the latter often called “The Great American Novel”.

(1919) Anarchist bombs explode in eight US cities
Operatives of Italian anarchist Luigi Galleani detonate package bombs in eight cities, causing property destruction and two deaths. The future US president and his wife, Franklin and Eleanor Roosevelt, narrowly escape a blast, having walked by a package moments before it detonated.
The 1919 United States anarchist bombings were a series of bombings and attempted bombings carried out by anarchist followers of Luigi Galleani from April through June 1919. These bombings led to the Red Scare of 1919–20. 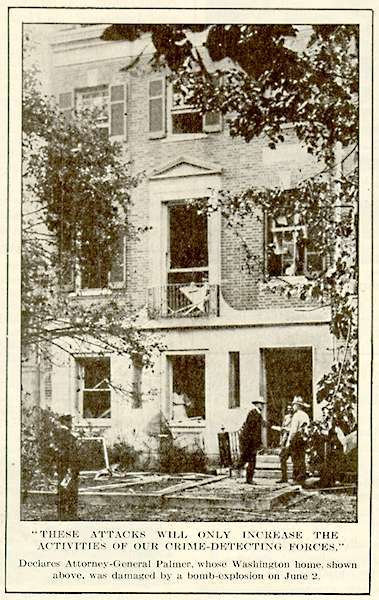 (1953) A young queen is crowned in Westminster Abbey
In the first major event to be televised internationally, Elizabeth Windsor, 25, is crowned Queen Elizabeth II of the United Kingdom. Sixteen months in preparation, the coronation hosts 8,000 guests to witness the ceremony from inside London’s Westminster Abbey, while millions across Europe watch on live TV.
The coronation of Queen Elizabeth II as monarch of the United Kingdom, Canada, Australia, New Zealand, South Africa, Pakistan and Ceylon took place on 2 June 1953 at Westminster Abbey. Elizabeth ascended the throne at the age of 25, upon the death of her father, King George VI, on 6 February 1952, and was proclaimed queen by her various privy and executive councils shortly afterwards. The coronation took place more than a year later because of the tradition that holding such a festival is inappropriate during the period of mourning that follows the death of a monarch. During the service, she took and subscribed an oath to, among other things, govern the peoples according to their respective laws and customs, was anointed with holy oil, presented and invested with regalia, and crowned.

(2004) Ken Jennings begins ‘Jeopardy!’ streak
Contestant Ken Jennings wins on ‘Jeopardy!,’ beginning a 74-game streak that will net him about $2.5 million. He will finally lose nearly six months later, with an incorrect response to the Final Jeopardy! answer, ‘Most of this firm’s 70,000 seasonal white-collar employees work only four months a year.’
Kenneth Wayne “Ken” Jennings III is an American game show contestant and author. Jennings holds the record for the longest winning streak on the U.S. syndicated game show Jeopardy! and as being the second highest-earning contestant in game show history. In 2004, Jennings won 74 Jeopardy! games before he was defeated by challenger Nancy Zerg on his 75th appearance. His total earnings on Jeopardy! are $3,196,300, consisting of $2,520,700 over his 74 wins, a $2,000 second-place prize in his 75th appearance, a $500,000 second-place prize in the Jeopardy! Ultimate Tournament of Champions, a $100,000 win for second-place prize in the Jeopardy Battle of the Decades, as well as half of a $300,000 prize in the IBM Challenge, when he competed against Watson.

(1647) Alse Young is the first American executed for witchcraft
Forty-five years before the hysteria of the Salem Witch Trials, the first American colonist accused of witchcraft, Alse Young, is executed in the town square of Hartford, Connecticut. More executions will follow, as witchcraft would remain a capital crime in Connecticut until 1750.
Alse Young of Windsor, Connecticut — sometimes Achsah Young or Alice Young — was the first recorded instance of execution for witchcraft in the thirteen American colonies. Very little is recorded of Alse Young; her existence is only known through her reputation as a witch. She is believed to have been the wife of John Young, who bought a small parcel of land in Windsor in 1641, sold it in 1649, and then disappeared from the town records. She had a daughter, Alice Young Beamon, who would be accused of witchcraft in nearby Springfield, Massachusetts, some 30 years later. Like many similar cases of witchcraft, Alse Young was a woman without a son when the accusation was lodged, which implied that she would be eligible to receive through inheritance her husband’s estate.

(1897) Tale of a toothy Transylvanian arrives at booksellers
Irish author Bram Stoker’s novel of Gothic horror, ‘Dracula,’ is published in London. Readers are hooked by the bloodthirsty tale, and the story makes an ideal yarn for invasion literature fans, but the count’s allure will really take flight decades later with the advent of cinema.
Dracula is an 1897 Gothic horror novel by Irish author Bram Stoker. It marks the initial appearance of the famous literary figure Count Dracula, establishing many modern notions of vampire lore. The novel tells the story of Dracula’s attempt to move from Transylvania to England so that he may find new blood and spread the undead curse, and of the battle between Dracula and a small group of men and women led by Professor Abraham Van Helsing.

(1975) Evel Knievel crashes at Wembley
Before a crowd of 70,000, daredevil Evel Knievel attempts to jump his motorcycle over 13 buses at London’s Wembley Stadium. As he lands, he’s thrown onto the concrete, sustaining multiple serious injuries. Hobbling back up onto the launch ramp, Knievel tells the crowd, ‘I will never, ever, ever jump again. I’m through.’ Six months later, he will indeed jump again.

Robert Craig “Evel” Knievel Jr. (October 17, 1938 – November 30, 2007) was an American stunt performer. Over the course of his career, he attempted more than 75 ramp-to-ramp motorcycle jumps; in 1974, he failed an attempted canyon jump across Snake River Canyon in the Skycycle X-2, a steam-powered rocket.

Knievel was inducted into the Motorcycle Hall of Fame in 1999. He died of pulmonary disease in Clearwater, Florida in 2007, aged 69.

After the Snake River jump, Knievel returned to motorcycle jumping with ABC’s Wide World of Sports televising several jumps. On May 26, 1975, in front of 90,000 people at Wembley Stadium in London, Knievel crashed while trying to land a jump over 13 redundant single-deck AEC Merlin buses (the term “London Buses” used in earlier publicity had led to the belief that the attempt was to be made over the higher and more traditional AEC Routemaster double-decker type).

After the crash, despite breaking his pelvis, Knievel addressed the audience and announced his retirement by stating, “Ladies and gentlemen of this wonderful country, I’ve got to tell you that you are the last people in the world who will ever see me jump. Because I will never, ever, ever jump again. I’m through.” Near shock and not yielding to Frank Gifford’s (of ABC’s Wide World of Sports) plea to use a stretcher, Knievel walked off the Wembley pitch stating, “I came in walking, I went out walking!”

(1998) Australia holds its first National Sorry Day
Australia observes National Sorry Day, a remembrance of government wrongs committed towards indigenous peoples. Especially important is recognition of ‘The Stolen Generations’ policies that took Aboriginal children from their parents and adopted them out to white Australian families.
National Sorry Day is an annual event that has been held in Australia on 26 May, since 1998, to remember and commemorate the mistreatment of the country’s Indigenous population. During the 20th century, Australian governments’ policies resulted in a “Stolen Generation” – described by John Torpey as “Aboriginal children separated, often forcibly, from their families in the interest of turning them into white Australians”.
wiki/National_Sorry_Day
4.2.m17