(1664) A legendary fighting force forms in Britain
Chartered by King Henry VIII, England’s Honourable Artillery adds a new company to its roster, The Duke of York and Albany’s Maritime Regiment of Foot. They’ll go on to be renamed the Royal Marines almost 100 years later, and emerge as one of the world’s great fighting units.
The Corps of Royal Marines is the amphibious light infantry and one of the five fighting arms or branches of the Royal Navy. The Royal Marines were formed in 1755 as the Royal Navy’s infantry troops. However, the marines can trace their origins back to the formation of the English Army’s “Duke of York and Albany’s maritime regiment of Foot” at the grounds of the Honourable Artillery Company on 28 October 1664.

Cap badge of the Royal Marines
wiki/Royal_Marines
4.15.A18
(1664) A legendary fighting force forms in Britain.
Also on this day,

The River Tiber’s banks swarm with charging men, clashing metal, and rearing horses as hundreds of thousands fight for control of the Roman Empire in its capital. Some accounts claim Constantine saw a vision from the Christian god the night before, and his side emerges victorious.

Seventeen years of a massive building project completed, Beijing is now China’s capital city. Having restored the Ming Dynasty, Emperor Zhu Di desires a power center to match his ambitions, and he’ll get just that as Beijing’s imperial palace, the Forbidden City, opens this year as well.

‘Liberty Enlightening the World,’ 151-feet of copper neoclassical sculpture, is accepted as a gift from France and dedicated by US President Grover Cleveland after hundreds of thousands of revelers throw the world’s first ticker-tape parade in honor of the new lady of Liberty Island.

(1886) Lady Liberty lifts a lamp over New York Harbor
'Liberty Enlightening the World,' 151-feet of copper neoclassical sculpture, is accepted as a gift from France and dedicated by US President Grover Cleveland after hundreds of thousands of revelers throw the world's first ticker-tape parade in honor of the new lady of Liberty Island.
The Statue of Liberty is a colossal neoclassical sculpture on Liberty Island in New York Harbor in New York City, in the United States. The copper statue, a gift from the people of France to the people of the United States, was designed by French sculptor Frédéric Auguste Bartholdi and built by Gustave Eiffel. The statue was dedicated on October 28, 1886. 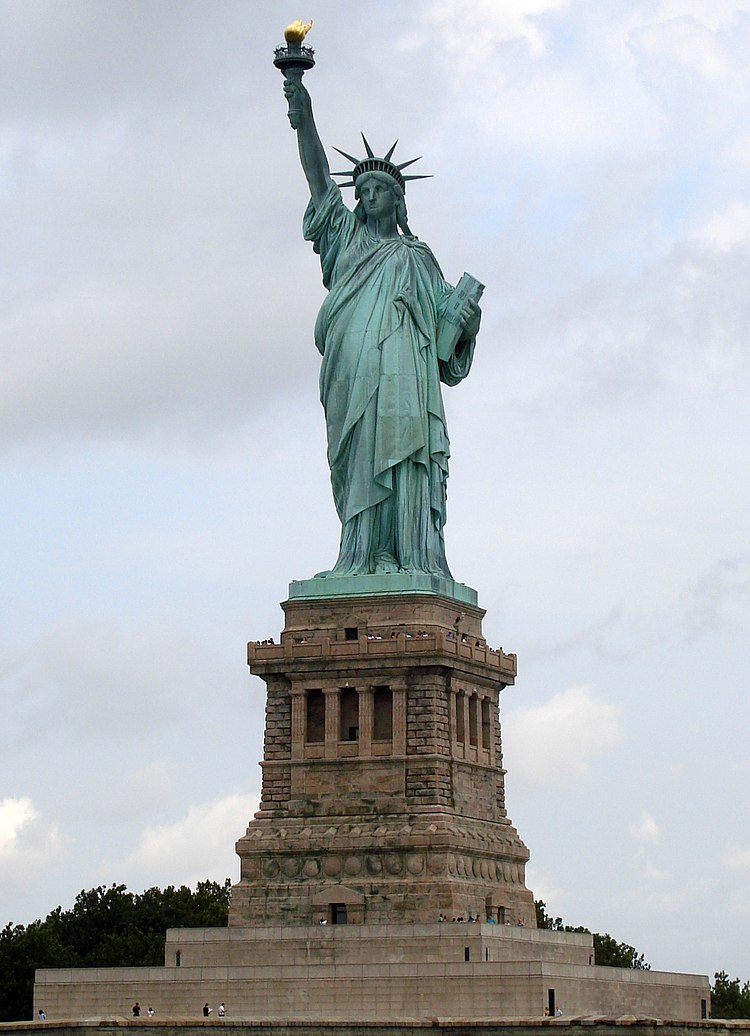 (1886) Geronimo lays down arms after 30 years of fighting
Apache leader Goyalkla, or as he’s known to non-Native Americans, Geronimo, formally surrenders after the US Army 4th Cavalry relentlessly pursues him and his band of warriors throughout southern Arizona. Geronimo will be the last Native American war chief to officially lay down arms.
Geronimo was a prominent leader and medicine man from the Bedonkohe band of the Apache tribe. From 1850 to 1886 Geronimo joined with members of three other Chiricahua Apache bands—the Tchihende, the Tsokanende and the Nednhi—to carry out numerous raids as well as resistance to US and Mexican military campaigns in the northern Mexico states of Chihuahua and Sonora, and in the southwestern American territories of New Mexico and Arizona. Geronimo’s raids and related combat actions were a part of the prolonged period of the Apache–United States conflict, which started with American settlement in Apache lands following the end of the war with Mexico in 1848.

Geronimo, Chiricahua Apache leader. Photograph by Frank A. Rinehart, 1898
wiki/Geronimo
4.15.A18
(1886) Geronimo lays down arms after 30 years of fighting.
Also on this day,

Flavius Odoacer becomes the first king of Italy after leading a successful rebellion against Western Rome’s young emperor. The beginning of his reign will traditionally mark the end of the Ancient Roman epoch and the start of the Middle Ages.

After months of revved-up publicity, Ford Motor Company debuts a new car, but clever Madison Avenue ad campaigns won’t be able save the ill-fated auto. A combo of bad design choices and screwy mechanics dooms the Edsel to low sales, and the name itself will become a byword for overhyped failures.

Swimming phenom Mark Spitz, 22, caps off 16 years of medal-winning competition with the biggest amateur athletics prize of all, Olympic gold. The famously mustachioed US swimmer takes a total of seven gold medals at the Munich Games, a record that will stand for 36 years.

(1972) Spitz rules the pool at Munich's Olympic games
Swimming phenom Mark Spitz, 22, caps off 16 years of medal-winning competition with the biggest amateur athletics prize of all, Olympic gold. The famously mustachioed US swimmer takes a total of seven gold medals at the Munich Games, a record that will stand for 36 years.
Mark Andrew Spitz is an American former competitive swimmer, nine-time Olympic champion, and former world record-holder in 7 events. He won seven gold medals at the 1972 Summer Olympics in Munich West Germany, an achievement surpassed only by Michael Phelps, who won eight golds at the 2008 Summer Olympics in Beijing. Spitz set new world records in all seven events in which he competed in 1972. Spitz holds more medals than any other Jewish athlete in the history of the Olympics.