(1869) Egypt’s canal brings Europe and Asia closer together
After 10 years of construction, the Suez Canal finally opens. Stretching across Egypt to connect the Mediterranean Sea and the Red Sea, the 100-mile-long artificial waterway allows ships to travel between Europe and Asia without having to make the long and dangerous trip around Africa.
The Suez Canal is an original sea-level waterway in Egypt, connecting the Mediterranean Sea to the Red Sea through the Isthmus of Suez. Constructed by the Suez Canal Company between 1859 and 1869, it was officially opened on 17 November 1869. The canal offers watercraft a shorter journey between the North Atlantic and northern Indian Oceans via the Mediterranean and Red Seas by avoiding the South Atlantic and southern Indian Oceans, reducing the journey by approximately 6,000 kilometres. It extends from the northern terminus of Port Said to the southern terminus of Port Tewfik at the city of Suez. Its length is 193.30 km, including its northern and southern access channels. In 2012, 17,225 vessels traversed the canal. 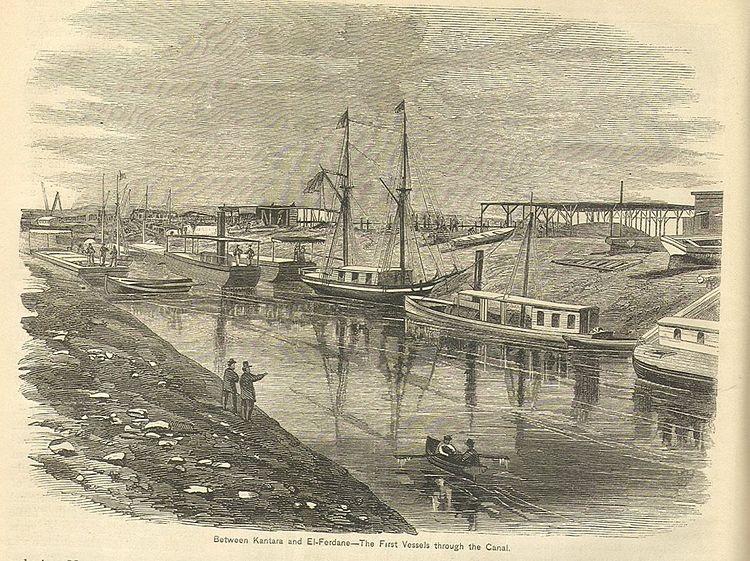 The 25-year-old Elizabeth becomes queen after the death of her half-sister, Queen Mary I. Elizabeth, the daughter of Henry VIII and Anne Boleyn, will reign for 44 years. In that time, Protestantism will flourish as well as the arts and exploration. ‘The Virgin Queen’ will never marry.

NBC stuns football fans when it breaks away from an intense Raiders-Jets game in the final seconds for the scheduled made-for-TV movie ‘Heidi,’ about a young girl in the Alps. The Raiders score twice and win the game 43-32, but only the fans in the stadium get to see it.

‘People have got to know whether or not their president is a crook. Well, I’m not a crook.’ Nixon offers this declaration at a press conference where he had come to defend his record amid the Watergate scandal and allegations of financial impropriety. The quote will become one of his most infamous lines.

(1973) US President Richard Nixon to reporters: "I'm not a crook"
'People have got to know whether or not their president is a crook. Well, I'm not a crook.' Nixon offers this declaration at a press conference where he had come to defend his record amid the Watergate scandal and allegations of financial impropriety. The quote will become one of his most infamous lines.
Richard Milhous Nixon was the 37th President of the United States from 1969 until 1974, when he resigned from office, the only U.S. president to do so. He had previously served as the 36th Vice President of the United States from 1953 to 1961, and prior to that as a U.S. Representative and also Senator from California. 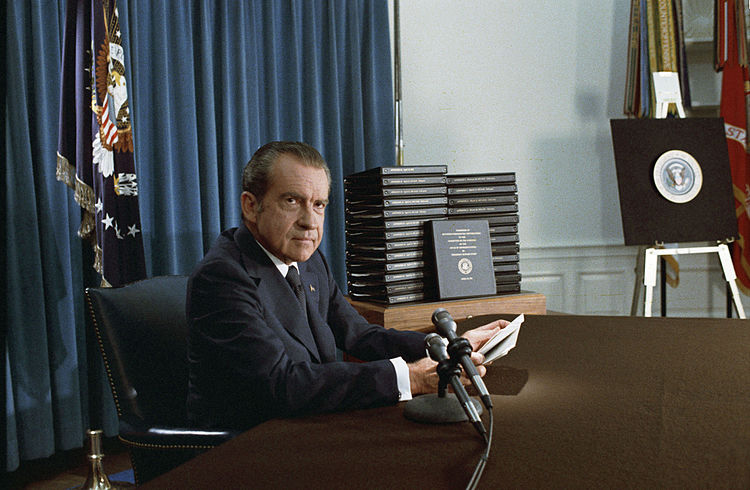 Nixon announces the release of edited transcripts of the Watergate tapes, April 29, 1974.

(1774) Teen sovereigns begin their sumptuous reign
Amid rumblings of discontent from their subjects, Louis XVI, 19, and his bride Marie Antoinette, 18, become the reigning monarchs of France. Anti-aristocracy passions, already simmering due to the country’s debt problems, will only increase as the populace leans towards revolution.
Louis XVI, born Louis-Auguste, was the last King of France and Navarre before the French Revolution; during which he was also known as Louis Capet. In 1765, at the death of his father, Louis, Dauphin of France, son and heir apparent of Louis XV of France, Louis-Auguste became the new Dauphin. Upon his grandfather’s death on 10 May 1774, he became King of France and Navarre, which he remained until 4 September 1791, when he received the title of King of the French until his suspension on 10 August 1792. Louis XVI was guillotined on 21 January 1793.


wiki/Louis_XVI_of_France
Marie Antoinette; French:; born Maria Antonia Josepha Johanna was the last Queen of France and Navarre before the French Revolution. She was born an Archduchess of Austria, and was the fifteenth and second youngest child of Empress Maria Theresa and Francis I, Holy Roman Emperor.

(1869) Golden spike completes transcontinental railroad
A ceremonial golden spike, and the official telegraph message ‘DONE,’ mark the end of six years of labor on a massive scale, as the US transcontinental railroad is completed. Once a half-year’s journey, the trip from one coast of North America to the other now takes about a week.
The First Transcontinental Railroad was a 1,912-mile continuous railroad line constructed between 1863 and 1869 that connected the existing eastern U.S. rail network at Omaha, Nebraska/Council Bluffs, Iowa with the Pacific coast at the Oakland Long Wharf on San Francisco Bay. The rail line was built by three private companies over public lands provided by extensive US land grants. Construction was financed by both state and US government subsidy bonds as well as by company issued mortgage bonds. The Western Pacific Railroad Company built 132 mi of track from Oakland/Alameda to Sacramento, California. The Central Pacific Railroad Company of California constructed 690 mi eastward from Sacramento to Promontory Summit, Utah Territory. And the Union Pacific built 1,085 mi from the road’s eastern terminus at Council Bluffs near Omaha, Nebraska westward to Promontory Summit.
wiki/First_Transcontinental_Railroad

(1872) First female US presidential candidate is nominated
The Equal Rights Party nominates suffragist Victoria Woodhull for president of the United States. Her candidacy, the first ever by a woman in the US, will be derailed a few days before the election when she’s arrested on obscenity charges, but she will try again in subsequent elections.
Victoria Claflin Woodhull, later Victoria Woodhull Martin was an American leader of the woman’s suffrage movement. In 1872, Woodhull ran for President of the United States. While many historians and authors agree that Woodhull was the first woman to run for President of the United States, some have questioned that priority given issues with the legality of her run. They disagree with classifying it as a true candidacy because she was younger than the constitutionally mandated age of 35. However, election coverage by contemporary newspapers does not suggest age was a significant issue. The presidential inauguration was in March 1873. Woodhull’s 35th birthday was in September 1873.

(1970) Bobby Orr’s Stanley Cup-winning shot
Boston Bruins defenseman Bobby Orr scores in overtime to sweep the St. Louis Blues and win the Stanley Cup. Tripped as he shoots, Orr raises his arms in victory as he flies through the air, making it one of the most iconic goals in NHL history.
Robert Gordon “Bobby” Orr, OC is a Canadian former professional ice hockey player, widely acknowledged as one of the greatest hockey players of all time. Orr used his ice skating speed, scoring, and play-making abilities to revolutionize the position of defenceman. He played in the National Hockey League for 12 seasons, starting with 10 with the Boston Bruins followed by two with the Chicago Black Hawks. Orr remains the only defenceman to have won the league scoring title with two Art Ross Trophies. He holds the record for most points and assists in a single season by a defenceman. Orr won a record eight consecutive Norris Trophies as the NHL’s best defenceman and three consecutive Hart Trophies as the league’s most valuable player. Orr was inducted into the Hockey Hall of Fame in 1979 at age 31, the youngest to be inducted at that time. On January 27, 2017, in a ceremony during the All-Star Weekend in Los Angeles, Orr was part of the second group of players to be named one of the ‘100 Greatest NHL Players’ in history. After his hockey career, he became a well-known scout for many professional teams. He also spends time talking to and mentoring young skaters.