(1787) Forming a ‘more perfect union’ is debated in Philadelphia
What’s at stake for Philadelphia’s Constitutional Convention is no less than the formulation of a system to lead a newly born nation into a mature, and revolutionary, form of government. George Washington presides over a gathering of eminent minds to hammer out the details.
The Constitutional Convention took place from May 25 to September 17, 1787, in the old Pennsylvania State House in Philadelphia, Pennsylvania. Although the Convention was intended to revise the league of states and first system of government under the Articles of Confederation and Perpetual Union,, the intention from the outset of many of its proponents, chief among them James Madison of Virginia and Alexander Hamilton of New York, was to create a new government rather than fix the existing one. The delegates elected George Washington of Virginia, former commanding general of the Continental Army in the late American Revolutionary War, to preside over the Convention. The result of the Convention was the creation of the Constitution of the United States, placing the Convention among the most significant events in the history of the United States and indeed of worldwide historical, political and social influence. 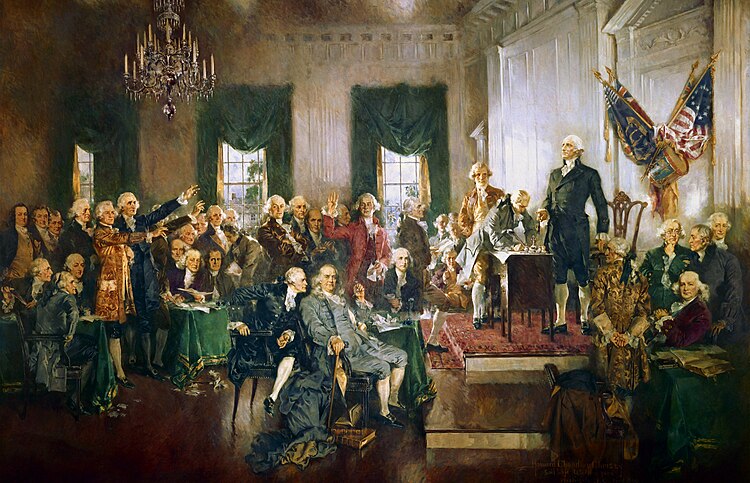 Scene at the Signing of the Constitution of the United States
wiki/Constitutional_Convention_(United_States)
4.10.m18