(1770) Captain James Cook makes an accidental discovery
English explorer Captain James Cook’s ship runs aground off the coast of Australia, in the world’s largest coral reef system. The Great Barrier Reef was already well-known to the Aboriginal Australian and Torres Strait Islander peoples.
The Great Barrier Reef is the world’s largest coral reef system composed of over 2,900 individual reefs and 900 islands stretching for over 2,300 kilometres over an area of approximately 344,400 square kilometres. The reef is located in the Coral Sea, off the coast of Queensland, Australia. 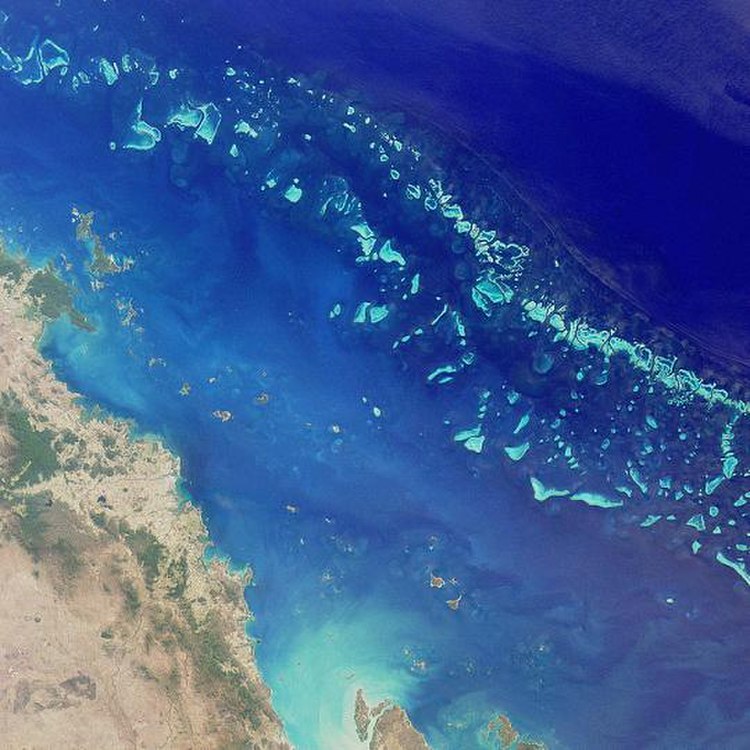 ‘Lovesick Blues’ is a huge hit and is Hank Williams’ ticket to country music’s Mecca, the Grand Ole Opry, where Hank and his Drifting Cowboys wow the crowd and play a record six encores. Williams’ meteoritic rise will flame out when he dies, due in part to alcohol abuse, at the age of 29.

1962 | Inmates escape from ‘The Rock’ and disappear into the bay

John Hughes’ comedy about a high school student’s elaborate plan to skip school hits theaters. It will become a box office success and produce quotes and catch phrases that will permeate pop culture for years to come. It’s over. Go home. Go.

(1770) American patriots gunned down in Boston
British soldiers clash with American colonists who are protesting British occupation of their city. The patriots’ taunts and snowballs are met by the troop’s musket fire. Five colonists die and three are wounded. The incident will fuel animosity toward British authorities among the colonists.
The Boston Massacre, known as the Incident on King Street by the British, was an incident on March 5, 1770, in which British Army soldiers shot and killed people while under attack by a mob. The incident was heavily propagandized by leading Patriots, such as Paul Revere and Samuel Adams, to fuel animosity toward the British authorities. British troops had been stationed in Boston, capital of the Province of Massachusetts Bay, since 1768 in order to protect and support crown-appointed colonial officials attempting to enforce unpopular Parliamentary legislation. Amid ongoing tense relations between the population and the soldiers, a mob formed around a British sentry, who was subjected to verbal abuse and harassment. He was eventually supported by eight additional soldiers, who were subjected to verbal threats and repeatedly hit by clubs, stones and snowballs. They fired into the crowd, without orders, instantly killing three people and wounding others. Two more people died later of wounds sustained in the incident.

(1946) Winston Churchill’s speech warns West of ‘Iron Curtain’
In a speech delivered at Westminster College in Fulton, MO, the former British Prime Minister decries the Soviet Union’s growing militaristic dominance of Europe and raises the specter of an “iron curtain” descending across the continent. The phrase will immediately become shorthand for Cold War divisions.

The Iron Curtain was the name for the boundary dividing Europe into two separate areas from the end of World War II in 1945 until the end of the Cold War in 1991. A term symbolizing the efforts by the Soviet Union to block itself and its satellite states from open contact with the West and non-Soviet-controlled areas. On the east side of the Iron Curtain were the countries that were connected to or influenced by the Soviet Union. Separate international economic and military alliances were developed on each side of the Iron Curtain.

Physically, the Iron Curtain took the form of border defenses between the countries of Europe in the middle of the continent. The most notable border was marked by the Berlin Wall and its Checkpoint Charlie, which served as a symbol of the Curtain as a whole.

The events that demolished the Iron Curtain started in discontent in Poland, and continued in Hungary, the German Democratic Republic (East Germany), Bulgaria, Czechoslovakia, and Romania. Romania became the only communist state in Europe to overthrow its totalitarian government with violence.

The use of the term iron curtain as a metaphor for strict separation goes back at least as far as the early 19th century. It originally referred to fireproof curtains in theaters. Although its popularity as a Cold War symbol is attributed to its use in a speech Winston Churchill gave in March 1946 in Fulton, Missouri, Nazi Minister of Propaganda Joseph Goebbels had already used the term in reference to the Soviet Union.

In one of the most famous orations of the Cold War period, former British Prime Minister Winston Churchill condemns the Soviet Union’s policies in Europe and declares, “From Stettin in the Baltic to Trieste in the Adriatic, an iron curtain has descended across the continent.” Churchill’s speech is considered one of the opening volleys announcing the beginning of the Cold War.

Churchill, who had been defeated for re-election as prime minister in 1945, was invited to Westminster College in Fulton, Missouri where he gave this speech. President Harry S. Truman joined Churchill on the platform and listened intently to his speech. Churchill began by praising the United States, which he declared stood “at the pinnacle of world power.” It soon became clear that a primary purpose of his talk was to argue for an even closer “special relationship” between the United States and Great Britain—the great powers of the “English-speaking world”—in organizing and policing the postwar world. In particular, he warned against the expansionistic policies of the Soviet Union. In addition to the “iron curtain” that had descended across Eastern Europe, Churchill spoke of “communist fifth columns” that were operating throughout western and southern Europe. Drawing parallels with the disastrous appeasement of Hitler prior to World War II, Churchill advised that in dealing with the Soviets there was “nothing which they admire so much as strength, and there is nothing for which they have less respect than for military weakness.”

Truman and many other U.S. officials warmly received the speech. Already they had decided that the Soviet Union was bent on expansion and only a tough stance would deter the Russians. Churchill’s “iron curtain” phrase immediately entered the official vocabulary of the Cold War. U.S. officials were less enthusiastic about Churchill’s call for a “special relationship” between the United States and Great Britain. While they viewed the English as valuable allies in the Cold War, they were also well aware that Britain’s power was on the wane and had no intention of being used as pawns to help support the crumbling British empire. In the Soviet Union, Russian leader Joseph Stalin denounced the speech as “war mongering,” and referred to Churchill’s comments about the “English-speaking world” as imperialist “racism.” The British, Americans, and Russians-allies against Hitler less than a year before the speech—were drawing the battle lines of the Cold War.

(1970) Nuclear Non-Proliferation Treaty goes into effect
The Treaty on the Non-Proliferation of Nuclear Weapons (NPT) goes into force as an effort to slow the ever-quickening pace of countries becoming armed with nuclear weapons. It’s feared that without it, there will be upwards of 30 more nations with “The Bomb” within 20 years.

The Treaty on the Non-Proliferation of Nuclear Weapons, commonly known as the Non-Proliferation Treaty or NPT, is an international treaty whose objective is to prevent the spread of nuclear weapons and weapons technology, to promote cooperation in the peaceful uses of nuclear energy, and to further the goal of achieving nuclear disarmament and general and complete disarmament.

Opened for signature in 1968, the treaty entered into force in 1970. As required by the text, after twenty-five years, NPT Parties met in May 1995 and agreed to extend the treaty indefinitely. More countries have adhered to the NPT than any other arms limitation and disarmament agreement, a testament to the treaty’s significance. As of August 2016, 191 states have adhered to the treaty, though North Korea, which acceded in 1985 but never came into compliance, announced its withdrawal from the NPT in 2003, following detonation of nuclear devices in violation of core obligations. Four UN member states have never accepted the NPT, three of which are thought to possess nuclear weapons: India, Israel, and Pakistan. In addition, South Sudan, founded in 2011, has not joined.

The NPT is often seen to be based on a central bargain:

The treaty is reviewed every five years in meetings called Review Conferences of the Parties to the Treaty of Non-Proliferation of Nuclear Weapons. Even though the treaty was originally conceived with a limited duration of 25 years, the signing parties decided, by consensus, to unconditionally extend the treaty indefinitely during the Review Conference in New York City on 11 May 1995, culminating successful U.S. government efforts led by Ambassador Thomas Graham Jr.

At the time the NPT was proposed, there were predictions of 25–30 nuclear weapon states within 20 years. Instead, over forty years later, five states are not parties to the NPT, and they include the only four additional states believed to possess nuclear weapons. Several additional measures have been adopted to strengthen the NPT and the broader nuclear nonproliferation regime and make it difficult for states to acquire the capability to produce nuclear weapons, including the export controls of the Nuclear Suppliers Group and the enhanced verification measures of the International Atomic Energy Agency (IAEA) Additional Protocol.

Critics argue that the NPT cannot stop the proliferation of nuclear weapons or the motivation to acquire them. They express disappointment with the limited progress on nuclear disarmament, where the five authorized nuclear weapons states still have 22,000 warheads in their combined stockpile and have shown a reluctance to disarm further. Several high-ranking officials within the United Nations have said that they can do little to stop states using nuclear reactors to produce nuclear weapons.

(1975) Homebrew Computer Club meets for the first time
An amateur computer-users group gathers in Menlo Park, California, to exchange ideas about their hobby of building digital devices. The meeting will be seen as the Big Bang of the personal computing revolution, with members going on to found influential companies. Apple co-founder Steve Wozniak designed the Apple I at the club.
The Homebrew Computer Club was an early computer hobbyist group in Silicon Valley which met from March 5, 1975 to December 1986, and was depicted in the films Pirates of Silicon Valley and Jobs, as well as the PBS documentary series, Triumph of the Nerds.