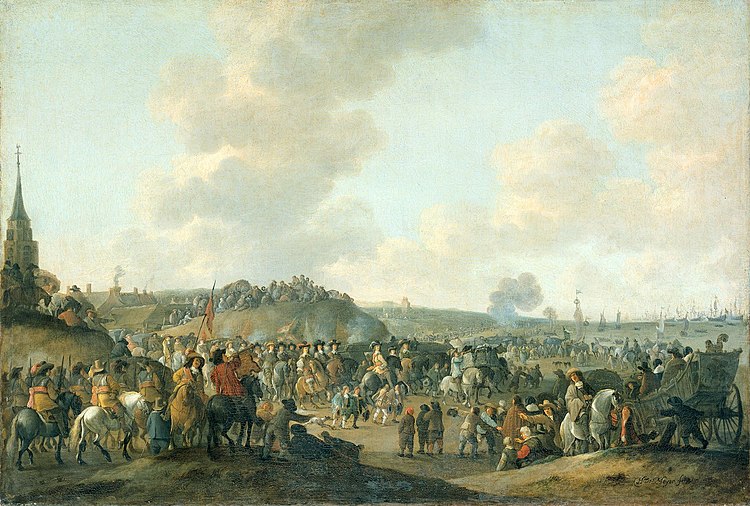 (1660) The Restoration begins as Charles II’s exile ends
With civil wars, revolutions, insurrections, and Cromwell’s Commonwealth behind him, England’s Charles II ends a nine-year exile, returning to London to reclaim his throne. The Restoration will end in 1688 when the Glorious Revolution establishes the supremacy of Parliament over the monarchy.
The Restoration of the English monarchy began in 1660 when the English, Scottish and Irish monarchies were all restored under Charles II after the Interregnum that followed the Wars of the Three Kingdoms. The term Restoration is used to describe both the actual event by which the monarchy was restored, and the period of several years afterwards in which a new political settlement was established. It is very often used to cover the whole reign of Charles II and often the brief reign of his younger brother James II. In certain contexts it may be used to cover the whole period of the later Stuart monarchs as far as the death of Queen Anne and the accession of the Hanoverian George I in 1714; for example Restoration comedy typically encompasses works written as late as 1710.

(1913) Stravinsky’s avant-garde ballet provokes a near-riot
Laughing, hissing, and shouting greet ‘The Rite of Spring’ as it premieres in Paris. The collaboration between Igor Stravinsky and Vaslav Nijinsky shocks many with its avant-garde music and unconventional dancing, but it will later be celebrated as one of the first great leaps of 20th-century art.
The Rite of Spring is a ballet and orchestral concert work by the Russian composer Igor Stravinsky. It was written for the 1913 Paris season of Sergei Diaghilev’s Ballets Russes company; the original choreography was by Vaslav Nijinsky, with stage designs and costumes by Nicholas Roerich. When first performed, at the Théâtre des Champs-Élysées on 29 May 1913, the avant-garde nature of the music and choreography caused a sensation and a near-riot in the audience. Although designed as a work for the stage, with specific passages accompanying characters and action, the music achieved equal if not greater recognition as a concert piece, and is widely considered to be one of the most influential musical works of the 20th century.

(1953) Hillary and Norgay are first to summit Mt. Everest
New Zealand’s Edmund Hillary and Nepal’s Tenzing Norgay stand at more than 29,000 feet atop the highest spot on earth. They remain on Mt. Everest’s summit just 15 minutes before Tenzing leaves an offering of chocolate, and Hillary a cross, and then begin their long, arduous descent.
The 1953 British Mount Everest expedition was the ninth mountaineering expedition to attempt the first ascent of Mount Everest, and the first confirmed to have succeeded when Edmund Hillary and Tenzing Norgay reached the summit on Friday, 29 May 1953. Led by Colonel John Hunt, it was organized and financed by the Joint Himalayan Committee. News of the expedition’s success reached London in time to be released on the morning of Queen Elizabeth II’s coronation, 2 June.