(1947) British Empire’s former ‘jewel in the crown’ breaks free
British Crown Rule ends in one of the most populous places on the planet, the vast, diverse country of India. Although the Dutch, Danish, and French were there before them, Britain has had a presence on the vast subcontinent since 1612. Today, however, India gains its freedom.
India, also called the Republic of India, is a country in South Asia. It is the seventh-largest country by area, the second-most populous country, and the most populous democracy in the world. It is bounded by the Indian Ocean on the south, the Arabian Sea on the southwest, and the Bay of Bengal on the southeast. It shares land borders with Pakistan to the west; China, Nepal, and Bhutan to the northeast; and Bangladesh and Myanmar to the east. In the Indian Ocean, India is in the vicinity of Sri Lanka and the Maldives. India’s Andaman and Nicobar Islands share a maritime border with Thailand and Indonesia.

1483 | Consecration for a chapel with a heavenly view

Pope Sixtus IV consecrates a chapel in Rome after painters, including Botticelli, have finished their frescos. The ceiling, however, still needs a little work, and 25 years later a new pope will hire Michelangelo to paint what will be considered one of the greatest artworks of all time.

1914 | A channel carved through rock and jungle joins oceans

Thirty-three years of toil comes to a close as one of the greatest engineering achievements in human history, a 51-mile-long channel carved through the Isthmus of Panama, opens to maritime traffic. The new shortcut between the Pacific and Atlantic will speed transport and remake the global economy.

Max Yasgur’s farm fills with masses of music lovers as the Woodstock Music and Art Fair kicks off its first day. Before the event is through, 400,000 will revel in rainstorms and mud, some of history’s best rock bands will jam, and a counterculture will consider itself transformed.

(1914) A channel carved through rock and jungle joins oceans
Thirty-three years of toil comes to a close as one of the greatest engineering achievements in human history, a 51-mile-long channel carved through the Isthmus of Panama, opens to maritime traffic. The new shortcut between the Pacific and Atlantic will speed transport and remake the global economy.
The Panama Canal is an artificial 48-mile waterway in Panama that connects the Atlantic Ocean with the Pacific Ocean. The canal cuts across the Isthmus of Panama and is a key conduit for international maritime trade. There are locks at each end to lift ships up to Gatun Lake, an artificial lake created to reduce the amount of excavation work required for the canal, 26 metres above sea level, and then lower the ships at the other end. The original locks are 33.5 metres wide. A third, wider lane of locks was constructed between September 2007 and May 2016. The expanded canal began commercial operation on June 26, 2016. The new locks allow transit of larger, Post-Panamax ships, capable of handling more cargo. 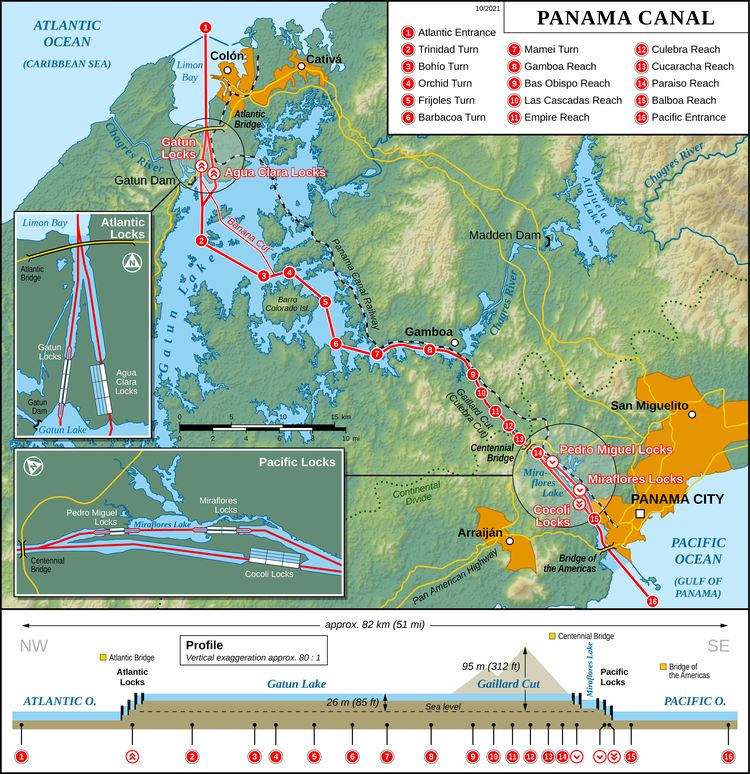 Map of the Panama Canal

(1483) King Richard III begins his rule of England
The House of York sends their last king to the throne of England, as Richard III begins his rule. His reign will be brief, ending two years later at the Battle of Bosworth Field, but his infamy will live on, as a future scribe named Shakespeare will find inspiration in Richard’s reputed villainy.
Richard III was King of England from 1483 until his death in 1485, at the age of 32, in the Battle of Bosworth Field. He was the last king of the House of York and the last of the Plantagenet dynasty. His defeat at Bosworth Field, the last decisive battle of the Wars of the Roses, marked the end of the Middle Ages in England. He is the subject of the historical play Richard III by William Shakespeare.

(1925) Chaplin’s Little Tramp stakes his Klondike claim
Silent-film star Charlie Chaplin hits a rich vein of comedy with a tale pitting his ‘Little Tramp’ against severe snowstorms, vicious villains, and dance hall dames. Two months after its Hollywood premiere, ‘The Gold Rush’ will go into wide release, striking box office gold.
During the Gold Rush, prospectors brave Alaska’s dangerous Chilkoot Pass, hoping to strike it rich in the snowy mountains. Just as Big Jim McKay discovers gold on his claim, a storm arises, prompting a Lone Prospector to take refuge in a cabin. Unknown to him, the cabin’s occupant is desperado Black Larsen, who attempts to throw the vagabond Prospector out. Strong winds, however, repeatedly blow the little man back inside, and soon after, Jim is also swept into the cabin. Jim fights with Larsen over his shotgun, and after Jim prevails, the Prospector claims him as a close friend in order to remain safe. Over the next few days, the three men live together uneasily, their hunger growing as the storm rages on.

(1963) Kennedy is a Berliner in key Cold War speech
Almost two years after communist East Germany built a wall separating East and West Berlin, US President John F. Kennedy speaks in front of a crowd of 450,000 in West Berlin and assures the city, surrounded by Soviet-backed East Germany, ‘Ich bin ein Berliner,’ or, ‘I am a Berliner.’
“Ich bin ein Berliner” is a quotation from a June 26, 1963, speech by U.S. President John F. Kennedy in West Berlin. Kennedy aimed to underline the support of the United States for West Germany 22 months after Soviet-supported East Germany erected the Berlin Wall to prevent mass emigration to the West. The message was aimed as much at the Soviets as it was at Berliners and was a clear statement of U.S. policy in the wake of the construction of the Berlin Wall. Another phrase in the speech was also spoken in German, “Lasst sie nach Berlin kommen”, addressed at those who claimed “we can work with the Communists”, a remark at which Nikita Khrushchev scoffed only days later.
wiki/Ich_bin_ein_Berliner

(1997) Harry meets Hogwarts in a spellbinding story
A boy learns he is not merely a muggle, and is summoned to study at a school of sorcery, in the debut children’s novel published on this day by an unknown British writer. ‘Harry Potter and the Philosopher’s Stone’ will spawn six sequels and make a household name of author J.K. Rowling.
Harry Potter and the Philosopher’s Stone is the first novel in the Harry Potter series and J. K. Rowling’s debut novel, first published in 1997 by Bloomsbury. It was published in the United States as Harry Potter and the Sorcerer’s Stone by Scholastic Corporation in 1998. The plot follows Harry Potter, a young wizard who discovers his magical heritage as he makes close friends and a few enemies in his first year at the Hogwarts School of Witchcraft and Wizardry. With the help of his friends, Harry faces an attempted comeback by the dark wizard Lord Voldemort, who killed Harry’s parents, but failed to kill Harry when he was just 15 months old.