The story of a rediscovered redwood

Like most things in nature, the trees featured on today’s homepage are worth a closer look. This species, known as the dawn redwood, was thought for hundreds of years to be extinct. Unlike other redwood trees (picture the towering evergreen giants that grow on California’s coast), this redwood is deciduous; in the fall its needles turn a brilliant orange, and then fall to the ground. Fossils of the species are common in the Northern Hemisphere, but there was no known evidence that it existed after the Miocene Epoch, which ended more than 5 million years ago. The tree was thought to have been long extinct until 1944, when a giant dawn redwood was discovered in south central China. More were found in surrounding lowlands, and today the tree is a popular ornamental in many parts of the world. The trees in our image, from Zhongshan, China, are standing in a shallow lake, which reflects the blue sky above.

(1917) An alluring spy faces a French firing squad
Courtesan, exotic dancer, and WWI spy, Margaretha Geertruida Zelle stands in front of a firing squad after her conviction on espionage charges. Dutch-born but inspired to adopt a new name and persona after living in Java, ‘Mata Hari’ is executed for her role as a German spy.
Margaretha Geertruida “Margreet” MacLeod, better known by the stage name Mata Hari, was a Dutch exotic dancer and courtesan who was convicted of being a spy for Germany during World War I and executed by firing squad in France.

Not yet 30, English writer Edward Gibbon arrives in Rome and experiences a life-changing epiphany. As he watches friars singing their vespers within the Temple of Jupiter’s ruins, the idea of writing a history of Rome first strikes him, and he’ll later date the ‘vision’ to this day.

1969 | Millions take to the streets, protesting for peace

With some 40,000 American troops killed in the Vietnam War, millions of people across the US and the world gather in a Moratorium to End the War in Vietnam, a mass demonstration calling for peace and a withdrawal of forces from Southeast Asia. It will be called history’s largest peace rally.

(1969) Millions take to the streets, protesting for peace
With some 40,000 American troops killed in the Vietnam War, millions of people across the US and the world gather in a Moratorium to End the War in Vietnam, a mass demonstration calling for peace and a withdrawal of forces from Southeast Asia. It will be called history's largest peace rally.
The Moratorium to End the War in Vietnam was a massive demonstration and teach-in across the United States against the United States involvement in the Vietnam War. It took place on October 15, 1969, followed a month later by a large Moratorium March on Washington. 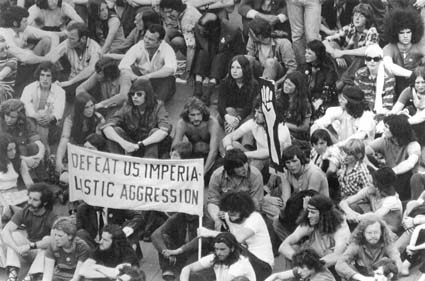