(1989) A brutal crackdown in Beijing’s Tiananmen Square
The People’s Liberation Army arrives in Tiananmen Square with assault weapons and tank columns to forcibly remove pro-democracy student demonstrators after seven weeks of protests. The government crackdown escalates, and thousands are killed as the Chinese military fires into the crowds.
The Tiananmen Square protests of 1989, commonly known in mainland China as the June Fourth Incident, were student-led demonstrations in Beijing, the capital of the People’s Republic of China, in 1989. More broadly, it refers to the popular national movement inspired by the Beijing protests during that period, sometimes called the ’89 Democracy Movement. The protests were forcibly suppressed after Chinese Premier Li Peng declared martial law. In what became known in the West as the Tiananmen Square Massacre, troops with automatic rifles and tanks killed at least several hundred demonstrators trying to block the military’s advance towards Tiananmen Square. The number of civilian deaths has been estimated variously from 180 to 10,454. 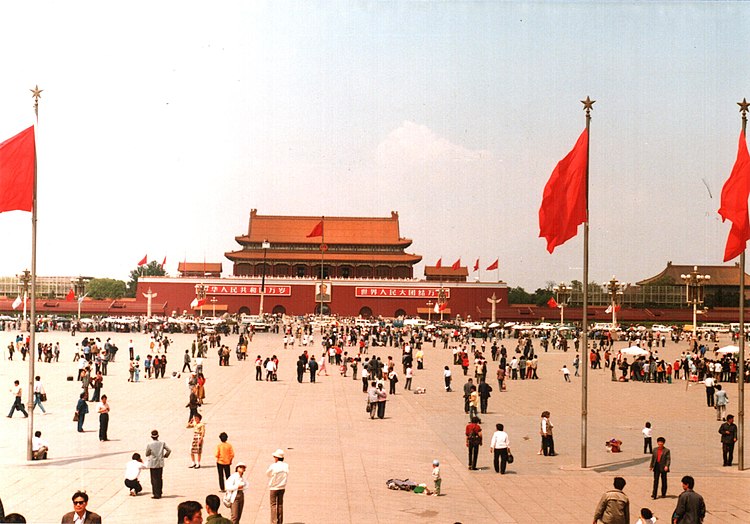 Live in May 1988. Tiananmen Square, Beijing, China. On the wall: Long live the People’s Republic of China, Long live the unity of the people of the world”. I had to travel to China, then to North Korea. One day – just relaxing in Budapest – next day on a jet over the gulf. We saw the cannon firing beneath (Iran-Iraq war, 1980-1988. China was a mystery, another planet at the time. Flying homebound I read the Chinese newspaper: János Kádár is gone.
wiki/Tiananmen_Square_protests_of_1989
4.11.j18