(1945) Japan accepts surrender terms as WWII officially ends
Black formal wear and military khaki meet on the deck of the USS Missouri battleship as a signing ceremony ending WWII gets under way. The Japanese foreign minister signs surrender documents, with General Douglas MacArthur signing for the Allies at the close of history’s most destructive war.

The surrender of Imperial Japan was announced on August 15 and formally signed on September 2, 1945, bringing the hostilities of World War II to a close. By the end of July 1945, the Imperial Japanese Navy (IJN) was incapable of conducting major operations and an Allied invasion of Japan was imminent. Together with the British Empire and China, the United States called for the unconditional surrender of the Japanese armed forces in the Potsdam Declaration on July 26, 1945—the alternative being “prompt and utter destruction”. While publicly stating their intent to fight on to the bitter end, Japan’s leaders (the Supreme Council for the Direction of the War, also known as the “Big Six”) were privately making entreaties to the still-neutral Soviet Union to mediate peace on terms more favorable to the Japanese. Meanwhile, the Soviets were preparing to attack Japanese forces in Manchuria and Korea (in addition to South Sakhalin and the Kuril Islands) in fulfillment of promises they had secretly made to the United States and the United Kingdom at the Tehran and Yalta Conferences.

On August 6, 1945, at 8:15 AM local time, the United States detonated an atomic bomb over the Japanese city of Hiroshima. Sixteen hours later, American President Harry S. Truman called again for Japan’s surrender, warning them to “expect a rain of ruin from the air, the like of which has never been seen on this earth.” Late in the evening of August 8, 1945, in accordance with the Yalta agreements, but in violation of the Soviet–Japanese Neutrality Pact, the Soviet Union declared war on Japan, and soon after midnight on August 9, 1945, the Soviet Union invaded the Imperial Japanese puppet state of Manchukuo. Later in the day, the United States dropped a second atomic bomb, this time on the Japanese city of Nagasaki. Following these events, Emperor Hirohito intervened and ordered the Supreme Council for the Direction of the War to accept the terms the Allies had set down in the Potsdam Declaration for ending the war. After several more days of behind-the-scenes negotiations and a failed coup d’état, Emperor Hirohito gave a recorded radio address across the Empire on August 15. In the radio address, called the Jewel Voice Broadcast (玉音放送 Gyokuon-hōsō), he announced the surrender of Japan to the Allies.

On August 28, the occupation of Japan by the Supreme Commander for the Allied Powers began. The surrender ceremony was held on September 2, aboard the United States Navy battleship USS Missouri, at which officials from the Japanese government signed the Japanese Instrument of Surrender, thereby ending the hostilities. Allied civilians and military personnel alike celebrated V-J Day, the end of the war; however, some isolated soldiers and personnel from Imperial Japan’s far-flung forces throughout Asia and the Pacific islands refused to surrender for months and years afterwards, some even refusing into the 1970s. The role of the atomic bombings in Japan’s unconditional surrender, and the ethics of the two attacks, is still debated. The state of war formally ended when the Treaty of San Francisco came into force on April 28, 1952. Four more years passed before Japan and the Soviet Union signed the Soviet–Japanese Joint Declaration of 1956, which formally brought an end to their state of war. 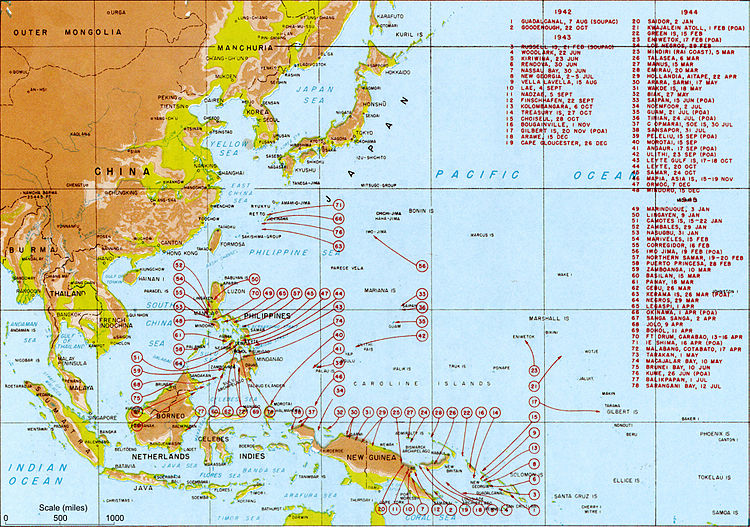 Allied landings in the Pacific Theatre of Operations, August 1942 to August 1945