(1937) A ‘wacky quacker’ leaves his mark
Daffy Duck makes his first appearance in a Looney Tunes animated short, ‘Porky’s Duck Hunt.’ The plot has Porky Pig and his dog Rover duck hunting, where they run into sneaky Daffy, who thwarts their efforts to bag a bird. In future appearances, Daffy will lose his manic edge and become more of a put-upon everyman, er duck.
Daffy Duck is an animated cartoon character produced by Warner Bros. Styled as an anthropomorphic black duck, the character has appeared in cartoon series such as Looney Tunes and Merrie Melodies, where he usually has been depicted as the best friend and occasional arch-rival of Bugs Bunny. Daffy was one of the first of the new “screwball” characters that emerged in the late 1930s to replace traditional everyman characters who were more popular earlier in the decade, such as Mickey Mouse and Popeye. Daffy starred in 130 shorts in the golden age, making him the third-most frequent character in the Looney Tunes/Merrie Melodies cartoons, behind Bugs Bunny’s 180 appearances and Porky Pig’s 162 appearances. 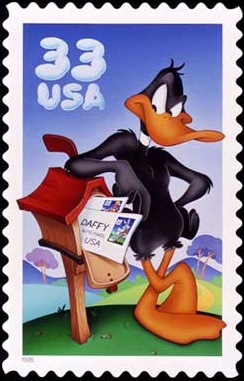 (1961) Ill-fated US ‘Bay of Pigs’ invasion of Cuba is launched
A huge Cold War blunder begins as around 1,500 CIA-trained anti-Castro Cuban exiles land at the Bay of Pigs on the southern coast of Cuba. Hoping to overthrow Fidel Castro’s communist government, the invasion force will instead face total defeat.
The Bay of Pigs Invasion was a failed military invasion of Cuba undertaken by the CIA-sponsored paramilitary group Brigade 2506 on 17 April 1961. A counter-revolutionary military, trained and funded by the United States government’s Central Intelligence Agency, Brigade 2506 fronted the armed wing of the Democratic Revolutionary Front and intended to overthrow the increasingly communist government of Fidel Castro. Launched from Guatemala and Nicaragua, the invading force was defeated within three days by the Cuban Revolutionary Armed Forces, under the direct command of Prime Minister Fidel Castro.

(1964) Iconic Ford Mustang unveiled at World’s Fair
The public gets its first look at Ford’s newest auto at the New York World’s Fair. The ‘pony car’ will go on to be Ford’s biggest seller since the Model T, inspiring a new class of sports cars that take to American asphalt in the ’60s and ’70s.

The first-generation Ford Mustang was manufactured by Ford from March 1964 until 1973. The introduction of the Mustang created a new class of automobile known as the pony car. The Mustang’s styling, with its long hood and short deck, proved wildly popular and inspired a host of competition.

It was initially introduced as a hardtop and convertible with the fastback version put on sale in August 1964. At the time of its introduction, the Mustang, sharing its underpinnings with the Falcon, was slotted into a compact car segment.

With each revision, the Mustang saw an increase in overall dimensions and in engine power. The 1971 model saw a drastic redesign to its predecessors. After an initial surge, sales were steadily declining, as Ford began working on a new generation Mustang. With the onset of the 1973 oil crisis, Ford was prepared, having already designed the smaller Mustang II for the 1974 model year. This new car had no common components with preceding models.

(2002) ‘General Hospital’ airs 10,000th episode
In 2002, the show celebrates a milestone with a flashback episode highlighting its first 39 years on the air. Demi Moore, Mark Hamill, Ricky Martin, and John Stamos all passed through the fictional town of Port Charles, NY, on their way to stardom.
Families, friends, enemies and lovers experience life-changing events in the large upstate New York city of Port Charles, which has a busy hospital, upscale hotel, cozy diner and dangerous waterfront frequented by the criminal underworld.